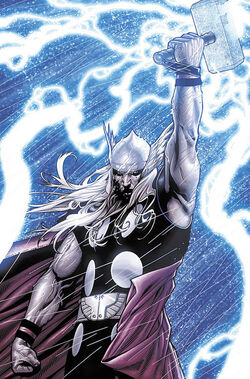 I am not Thor. I am Ragnarok, and you will have no mercy.

The dreaded Thor Clone, otherwise known as Ragnarok, has never been a heroic figure. He was made a Skrull war machine and killed heroic figures in the past. All the carnage he had done he did so with merciless obedience. So when Ezekiel Stane found him, he was put to good use in his private war. Fortunately, he and his peers were freed from him when Iron Man managed to wrestle control of them. Now left with free will, Ragnarok seeks to bring justice and free himself of the bloody legacy his masters left on his past. With a little bit of help, of course.

The storm heeds my call just as my template harnesses it. But don't expect me to live up to my name as much as he does.

Ragnarok was created to be a hard copy of the Thunder God himself. The works of men cannot replicate the strength of a god, but the clone isn't a weakling. Due to his construction, Ragnarok is immune to diseases and afflictions that plague the human race. His stamina is limitless and his need for power is easily replenished by utilizing his own weather-altering power. Even without energy recharge the Thor Clone is designed to be able to operate for a straight century, as his maker said.

Ragnarok's strength hardly approaches those of Thor's but he can keep up with him for a brief period of time. His strength allows him to easily carry large ships and overpower lesser superhumans. His durability is phenomenal as well, although he is not made of adamantium or vibranium. Aside from his physicality, Ragnarok of course has the ability to manipulate weather. His weather manipulation isn't as varied as Thor's own by any means but it's enough to get the job done. Truly, he is a pocket thunder god to behold with.

Ragnarok's implanted knowledge gives him an array of abilities. He isn't the best tactician but he is a capable fighter and a fearsome one. For an unspecified reason, Ragnarok's programming allows him to detect changes in a nearby place's weather and energy signatures. Aside from his combat abilities, Ragnarok's artificial intelligence means he can run many calculations and predict a multitude of outcomes within a short period of time. This ability falls short to those of Timespinner's, though.

Obviously, the Thor Clone is neither as strong nor complete as his template. As such, Ragnarok has a few glaring weaknesses. His robotic mind is protected by an advanced type of firewall but such software is obsolete as of now. His status as a mere clone means that he is no real thunder god, which in turn means that he can't manipulate and electricity weather or fly without his hammer.

Equipment: His classic Thor garment.
Transportation: His own flight ability and Carrier-Zero.
Weapons:

Retrieved from "https://marvelcomicsfanon.fandom.com/wiki/Ragnarok_(Earth-5000)?oldid=242899"
Community content is available under CC-BY-SA unless otherwise noted.