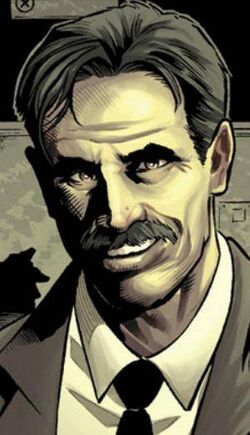 Wait a minute. Before you go chargin' in there like John Wayne, think for a minute.

Rafael "Rafe" Scarfe was born and raised in New York City, when he was old enough he joined the United States Army and served in the Vietnam War. He served at the same time as Mitchell Tanner.

After his tour of duty he returned to the New York and joined the N.Y.P.D. and rose through the ranks quickly becoming a Lieutenant. He was partnered with a tough as nails cop Misty Knight. However on a quiet day, Misty visited the bank. However the someone had also sent a bomb there. Misty tried to get rid of it but it exploded knocking her back, she survived but her arm was blown off. Rafe did his best to rap her arm and get her to the nearest hospital, where he stayed by his partners bedside.

Retrieved from "https://marvelcomicsfanon.fandom.com/wiki/Rafael_Scarfe_(Earth-1010)?oldid=130700"
Community content is available under CC-BY-SA unless otherwise noted.