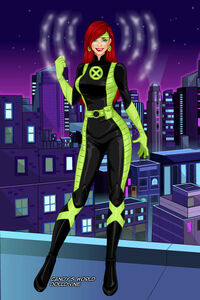 Rachel Anne Summers is the mutant daughter of Scott Summers and Phoenix (Jean Grey-Summers). According to Rachel, Jean Grey from her reality mirrored the modern era Jean Grey, but when this Jean was captured by Sentinels and piloted a spacecraft back to Earth, the Phoenix Force bonded with her, instead of placing her in a cocoon and replacing her. Another notable difference was when Jean/Phoenix returned to the home of her parents and, driven by Dark Phoenix's rage, demonstrated her powers in front of them, her father realized that, as a telepath, Jean could feel the subconscious fear that her parents and sister felt in her presence and, realizing that this was causing her pain that she could not block out, chose not to cast her out, as he did in the modern era. As a result, Phoenix did not commit suicide after the Sh'ar duel of honor (as she had in the modern era). Instead, Jean married Scott and had a single child, whom they named Rachel and who inherited Jean's psychic powers.

Being born from the Phoenix Force merging with Jean, Rachel inherited her mother's potential for telepathic and telekinetic powers and ability to tap into the limitless power of the Phoenix Force. Raised at Professor Charles Xavier's School for Gifted Youngsters, Rachel met and befriend fellow mutant Franklin Richards, the son of Fantastic Four members, Mr. Fantastic and Invisible Woman. When her powers manifested, Rachel joined the New Mutants, a younger generation of X-Men brought together to carry-on Professor Xavier's dream of a peaceful co-existence between humans and mutants. Rachel and Franklin fell in love and became a couple while she took on teaching responsibilities at the Institute.

Rachel co-led the X-men many times in her father’s absent while he was in Washington D.C. Rachel was assigned to have a team of X-men of her own in which included her younger half-sisters Megan, Ruby, Lady Mastermind and Sabretooth. Franklin proposed to Rachel with Cyclops’ approval and she said yes. The lavish wedding was held at the Institute and Megan and Ruby served as Bridesmaids. Rachel has since added Richards to her name and she is still the Co-Headmistress at the school.

Rachel and Franklin have 2 kids David and Dream Richards.

Rachel is an omega level mutant and the daughter of the Phoenix. Rachel inherited enormous psionic powers from her mother and has complete control over her powerful telepathy and telekinesis. Marvel Girl has developed an electric blue Phoenix emblem energy signature, which appears over her left eye whenever she uses her powers. Telepathy: can read minds and project her thoughts into other minds within a vast, potentially limitless radius. She has not always had access to her telepathy due to mental blocks. Even when her powers are inhibited, Rachel's telepathic abilities are honed to sense residual energy.

Telekinesis: Possesses telekinetic abilities enabling her to manipulate matter with the energy of her thoughts. Capable of very fine control over objects, including herself. On larger levels, Rachel can levitate great weights, into the hundreds of tons, but her upper limit has remained undisclosed.

Time Travel: Possesses the psionic power to displace herself and others at almost any specific point in the time stream and then reemerging in the physical world from as much as a few minutes to years by generating chronal energies. She could apparently travel in astral form as well. She could also travel to points in the future.

In conjunction with Marvel Girl's ability to astral travel through astral projection, Rachel can combine her telepathy with her abilities to manipulate time.

Rachel combines her ability to manipulate time with her telepathy and telekinesis with varied effects including:

Normal strength of a human woman of her age

Retrieved from "https://marvelcomicsfanon.fandom.com/wiki/Rachel_Summers-Richards_(Earth-10010)?oldid=261164"
Community content is available under CC-BY-SA unless otherwise noted.