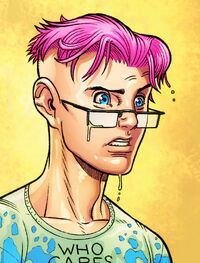 Quintavius "Quentin" Quirinius Quire joined the student body of the Xavier Institute after Professor X's return from averting a war with Genosha and the rebuilding of the X-Mansion. He immediately stood out as a brilliant intellectual and quickly became Xavier's prize pupil, though the extent and type of his mutant abilities were never clearly defined. Quire appeared to be a very powerful telepath, and the Stepford Cuckoos described him as having a 'see-through mind', but he was not necessarily limited to that.

Quentin had a crush on Sophie, one of the Stepford Cuckoos. but she reject him then he met Pixie who in return confessed her feelings for him.

Quentin has been described as an Omega Level Mutant and Omega Level Telepath/Telekinetic as well as a Psionic of Highest Order. Quentin has been described one of the most powerful telepaths, telekinetics and psions, vastly surpassing the abilities of all known telepaths, with the exception of Jean Grey. Therefore his abilities are almost unmatched. He was also an avatar of the Phoenix Force, and his future self was shown to be the eventual host of the Phoenix Force.

Telepathic Cloak: Can mask his presence from being detected by others. His abilities can at times go undetected or be counteracted by other more powerful telepaths depending on their level of skill in using their own psi abilities. He can extend these defenses to others around him as well.

Telepathic Illusions: He has the ability to create illusions to make himself seem to be invisible, look like someone else, or make others experience events that are not truly happening.

Absorb Information: He has the ability to quickly process, learn and store information via mental transference.

Super-Genius Intelligence: Quentin possess a brilliant mind rivaling some of the smartest people on the planet.

Retrieved from "https://marvelcomicsfanon.fandom.com/wiki/Quintavius_Quire_(Earth-16160)?oldid=274491"
Community content is available under CC-BY-SA unless otherwise noted.