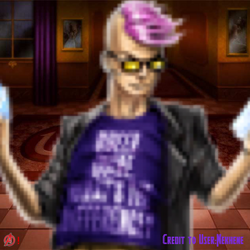 First appearance
Perks of Being a Wallflower

Quintavius "Quentin" Quirinius Quire joined the Hellfire Club Academy under the codename Kid Omega where he stood out as a brilliant intellect, though the extent and type of his mutant abilities were never clearly defined. Quire appeared to be a very powerful telepath

Telepathy: Capable of using deep and subtle influence. Also capable of displaying various psionic feats with the minds of others including reading and communicating with thoughts over vast distances.

Telekinesis: Quentin can manipulate objects and others at will, project psychokinetic bolts, generate potent force fields around himself and others, as well as levitate himself to fly at supersonic speeds. The uppermost limit of his telekinetic strength is unknown but it appears he is also capable of ultra-fine tuned usage of it.

Psychic Intelligence: He possesses advanced cognitive and mental abilities allowing him to organize and construct his thoughts at accelerated rates, process data at high speeds, construct and formulate his thoughts with vast quantity and quality, project ideas and impressions into the minds of others, intuitively disable existing psychic phenomena and barriers that even other Omega level types could not, and naturally shield him from psychic assaults. He thinks ten million brilliant thoughts per second.