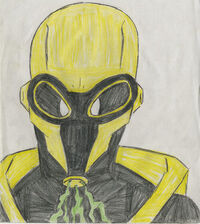 The Verminators, the Anti-Animal Alliance; hired and employed by Timothy Cox; former teammate with the Lumberjack and the Trophy Hunter Big-Game
Relatives
No known relatives
Universe

Citizen of the United States with a criminal record
Marital Status

Quincy Xavier was a bright chemistry student, but a high school dropout who took over his beloved father's job as a pest controller after he passed away. Hired by businessman Timothy Cox to get rid of a horde of cockroaches at one of Cox's abandoned nuclear power plants, Xavier was preparing to get rid of the infestation when the plant was attacked by the Zoologist and his family, who were attempting to save the roaches. Xavier attempted to gas the Zoologist, but was accidentally pushed into one of the plant's boilers, causing a massive dose of radiation to bombard Xavier and bond him with the chemical gases within his "backpack". The Zoologist and his family attempted to rescue him, but the heat was too great and they were forced to escape.


When Cox learned of the accident, he sent a team to recover what was left of Xavier's body. But, when they found him, Xavier, having learned to contain his body in his suit, suddenly awoke, and accidentally poisoned two of the recovery aids. Bewildered by what had happened, he attempted to return to Cox's headquarters, before learning that his suit had a leak that was slowly letting out Xavier's gaseous body. Infuriated by this, Xavier began recollecting on his past failures, which further angered him until he realized that the roaches he had been sent to get rid of were still alive and well. Pushed beyond insanity, Xavier unwittingly projected a concentrated burst of corrosive gas that dissolved the pests.


Startled, yet intrigued, Xavier pursued the rest of the cockroaches and dissolved them all. Now interested in his newfound powers, Xavier decided to use his powers to get ahead in life and became the criminal the Exterminator. Deciding to rob the nearest bank, he was confronted by Timothy Cox, who had seen everything from afar. Offering the criminal a chance to get revenge on the man, or animal, responsible for his transformation, as well as a hefty reward for doing so, Cox devised a plan to offer himself as a "fake" hostage for the Exterminator, unless the Zoologist agreed to battle him to the death alone.


Cox then approached the Exterminator to congratulate him on his success and give him a check for his reward. However, the Exterminator, now highly mentally unstable, began choking the corrupt businessman, now raising the price on the Zoologist’s defeat. Cox attempted to reason with Xavier, but the Exterminator simply laughed at his pleas, revealing that he believed that Cox knew the Zoologist would be at the facility the same day he was, and took both Cox and the Zoologist to Liberty Island, where he planned on televising their demises unless the state of New York gave Xavier $100,000,000 dollars in cold, hard cash.

He can utilize his forms for a variety of effects, including paralyzing and tranquilizing opponents, transforming into stun and knockout gas capable of stunning or knocking opponents’ unconscious, corrosive gas capable of melting through solid objects, squeezing through tight areas, change his body’s form, etc.

Before his transformation, Xavier possessed a keen intellect for chemistry and chemical engineering, although he lacked the motivation to achieve in high school. An expert in pest controlling, he was highly skilled in ridding infestations of vermin. After his transformation, he began studying everything he could about chemistry, chemicals, pesticides, pest controlling, etc., and is now one of the highest, albeit criminally insane, authorities on chemistry and chemical engineering.

He is vulnerable to any chemical interaction that would affect the chemical-form he is currently in. On one occasion, the Zoologist defeated him by spraying him with oxygen while he had taken the form of hydrogen, turning him into water. While generally immune to physical harm, he can still be harmed by different types of energy, such as super-strong winds, electricity, or sonic booms.

Retrieved from "https://marvelcomicsfanon.fandom.com/wiki/Quincy_Xavier_(Earth-11190)?oldid=255092"
Community content is available under CC-BY-SA unless otherwise noted.