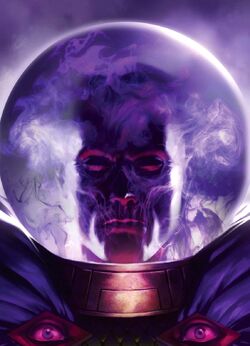 The funny thing is, they can't touch me... But I can torture them--Nope, torment them, flash them their greatest of nightmares before their very eyes... I can use their deepest, darkest of secrets against them until they beg for their own lives to be over, without a scratch...

Quentin Beck, born somewhere in the mid to late 1970s, was an expert in designing special effects devices and stage illusions, as well as a master hypnotist and magician, and an amateur chemist. Born in Riverside, California to a middle-aged widower father since Beck's mother died in an accident when he was still an infant, Beck barely got any motivation and encouragement from his own father growing up into the harsh and discriminating society of his neighborhood. However, Beck did find one interesting trait about his father: his former career as a former visual effects artist in Hollywood before meeting a woman named Elmore, who was also a fellow VFX artist, before they settled to get married in their mid-twenties and unexpectedly conceive a child that was Quentin. As a result of this discovery when he was only a teenager, Quentin got inspired as he now finds interest and enthusiasm towards film-making and making such creative special effects to entertain millions of people, but before he could've informed his father of his aspiring goal to be a world-renowned VFX artist someday, just like his parents, his father would leave his home and his life altogether but not before leaving him a letter of apology and reason for leaving, much to Quentin's absolute brokenness on finding it out, feeling like he has no hope or purpose to pursue his goals and make his father proud, after he has left him behind on his own.

Still, this did not dissuade Beck, who encourages himself to continue learn the art of practical special effects in such a delinquent age, admitting the painful truth that he was now on his own, and pledging that he would do whatever it takes, at all costs, just to achieve his dreams to be a renowned special artist. After graduating high school with the support of his wealthy but callous older cousin Maggy, Beck got accepted into the Massachusetts Institute of Technology where he developed technical knowledge that greatly helped him solidify his career aspirations. He also possessed a wealth of knowledge in hand-to-hand combat techniques that he learned as an actor and stuntman. Unfortunately, all these things did little to help his career in the film industry, diminishing his only chance to be a Hollywood star, be it a visual effects artist or even an actor, which would also slowly render Beck to experience and eventually be diagnosed with an emotionally unstable and insanely compulsive mentality. One day, a life-changing, but still somewhat deluded idea came into his mind by the moment he saw a documentary dedicated to the first presence of superheroes in the public eye, the now motivated Beck took it upon himself to seize the opportunity to become the world's next renowned superhero during the early to late 1990s, planning to triumph in fame over the already pre-existing heroes at the time, most notably the marvelous Knights of New York and the X-Men.

Mysterio chose the New York City vigilante Spider-Man as his target. He underestimated Spider-Man, viewing him as a relatively inexperienced and weak hero, considering that fact that he seemed to act and speak like a teenager, and felt it would be easy to take him down. Seeking to fortify a public reputation for himself within the heroic community, Beck feigned several staged attacks across the country with the use of his remarkable tech to frame the young web-slinger for crimes he has never done, seeking attention and recognition from the public as a new superhero. After his fraudulence was uncovered, and his plan to continue his destructive rampage across the country was revealed, Beck had proven himself to be a worthy adversary to Spider-Man, although his nonchalance and arrogance also proved to be his downfall. He used his gifted intellect and expertise on visual effects to develop a projection disguise, to hide his true intentions for these plans, only for his frame-up scheme to be eventually foiled by Spider-Man himself after a destructive final battle at a crowned carnival in Staten Island, ending with Spider-Man proving his innocence from Beck's staged attacks across the country.

Despite Beck's failure, however, he still was able to escape the authorities in the meantime, thanks to his remaining illusion tech which gave him the last-minute chance to run away into hiding back to his undisclosed base of operations. Due to the infamous mark Quentin had left on Spider-Man's rogues gallery in the latter's early years as the web-slinging vigilante, the public first called him the Mystery Man (courtesy of the Daily Globe), and eventually the now infamous title of Mysterio after J. Jonah Jameson from the Daily Bugle got the idea of naming it for their then-latest newspaper's title cover to battle their rival tabloid newspaper and media outlet, the Daily Globe, in terms of sales and competition in the market.

After several failed attempts at the web-slinger's life, Beck began to end his career as Mysterio for a short while after getting a cryptic offer from the charismatic and controversial entrepreneur Norman Osborn to work at Oscorp as the head of the research and development's new holographic illusions division, to which he doubted the latter existed at first, but would eventually accept the offer and would eventually work at Osborn's company for a discreet reason even Osborn himself was already aware of, gradually developing new, far more advanced designs to improve his illusion techs against Spider-Man. Later on, he would gladly accept both Osborn and Otto Octavius' secret invitation to join the Sinister Seven, a group of super-criminals who each have their own menacing grudge against Spider-Man.

As part of the small villainous organization, it was Mysterio's main objective have his new technological equipment project and imitate believable illusions of the X-Men and the Knights of New York to trap and subdue the slinger within an abandoned facility so that the rest of the Sinister Seven could surround once the latter would be finally weakened. However, Spider-Man quickly realized that he wasn't fighting his heroic idols and allies and used his iconic spider-sense to find Beck himself and defeated him yet again, before the slinger proceeded to track down and confront the remaining rogues which the latter ended up becoming successful at defeating them. With his defeat and (momentary) arrest, Mysterio's secret identity as Quentin Beck was finally revealed to the public. With his recent involvement with Oscorp being exposed, Osborn chose to abandon Beck by publicly denying to know about and be involved with Beck's double life as the Master of Illusions and continued to scold Back's reckless actions as a criminal just to cover up his involvement and life as the monstrous Green Goblin, a secret that has yet to be revealed until later, during the Ultimate War.

At some point later in time, Beck was somehow detained at Rykers' Island for some time after he was apprehended by Spider-Man for staging another attack somewhere in New England by projecting holographic versions of the Elementals, before eventually getting freed by Norman Osborn and subsequently joining him and the other freed inmates to reform the Sinister Seven once again. Upon teaming up as the Sinister Seven once again, the members questioned Osborn his true intentions and purpose on reforming the villainous alliance. Osborn smirked in response, then told his "disciples" that the entire reason of bringing back the team together was not necessarily because of the web-slinger, but because they were recruited into a much larger alliance simply known as the Movement, an alliance formed by several criminal & terrorist organizations, notably led by the Red Skull's organization Hydra and Mister Sinister's Brotherhood of Mutant Supremacy faction.

As the attacks all over the world have continued for days and then weeks, more and more casualties are sadly, starting to increase in numbers, due to the extreme terrorism and serious devastation, continuously committed by the conflict between the Movement Alliance and its seemingly unstoppable forces against the combined forces heroes and anti-heroes of the world, the Ultimate Alliance, who are not stopping their fight against the villains until they find a way to make them pay for their irreversible actions and restore back peace in the entire world. In the end of the conflict, the Sinister Seven would forcibly disband to evade capture from the authorities, although Beck was revealed to be the unfortunate ones due to him being defeated by Spider-Man and the Defenders as they begin to clean up the streets of New York City by hunting down the remaining supervillains who were still on the loose. Being handed over to the authorities for the first time, Beck and several other detained supervillains who participated in the Movement were imprisoned in Ryker's Island for his countless crimes with an unrevealed amount of term of their sentences.

Retrieved from "https://marvelcomicsfanon.fandom.com/wiki/Quentin_Beck_(Earth-61615)?oldid=238496"
Community content is available under CC-BY-SA unless otherwise noted.