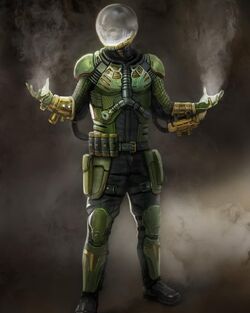 You should know by now, Spider-Man, that you can't trust your own eyes.

Once Hollywood’s premiere special effects artist, Quentin Beck was disgraced when one of his explosives malfunctioned and almost killed an actor. He himself was scarred by the explosion, and blackballed throughout the film industry.

Enraged and desperate for money, Quentin became inspired by the overwhelming amount of superheroes and villains in the world. He started hatching a plan to create his own persona, called Mysterio, in an attempt to convince the masses that he was a sorcerer from another dimension, while he secretly robbed them blind.

It wouldn’t be long until he was caught by Spider-Man, who exposed his charade and defeated him in battle by using his spider sense to tell illusions from reality. Imprisoned in the Raft, Mysterio was eventually freed when Doctor Octopus formed the Sinister Six with the promise to provide Mysterio with enough money to retire happily on his own island.

But this dream never came to fruition. The Sinister Six failed time and time again to kill Spider-Man. Then the day came when they were recruited by Screwball to participate in her “The Death of Spider-Man” livestream. Things were initially going according to plan, but that changed when the Avengers got involved.

At some point during the battle, Mysterio attempted to kill Captain America, only got Spider-Man to jump in front of the bullet. This would ultimately lead to Doctor Octopus’s surrender, and Mysterio ended up being defeated by Hawkeye. He, and the other surviving members of the Six, were then imprisoned on the Raft once more.

Retrieved from "https://marvelcomicsfanon.fandom.com/wiki/Quentin_Beck_(Earth-101)?oldid=249549"
Community content is available under CC-BY-SA unless otherwise noted.