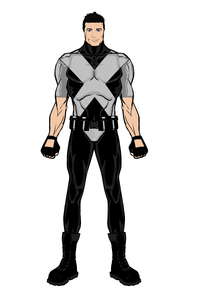 Class 100 strength, currently Pyotr is strong enough to and has been shown to lift at least 100 tons and more. As a teenager he was not as strong and could lift about 70 tons. Also even without transforming into his metal form Pyotr possesses the strength of a human of similar age and build who engages in regular extensive exercise, as a result he can lift up to twice his body weight . Pyotr can press lift 700 lbs in his normal form.

Just like all metal in the marvel universe, Colossus's metal skin is vulnerable to the anti-metal Vibranium. Colossus instinctively turns back into his normal form when he comes into contact with something made of Vibranium.

Retrieved from "https://marvelcomicsfanon.fandom.com/wiki/Pyotr_Rasputin_(Earth-515)?oldid=57524"
Community content is available under CC-BY-SA unless otherwise noted.