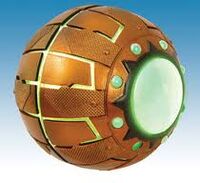 Norman Osborn of Earth-96283 had a version of "pumpkin bombs": one that released a bright, radioactive flash that reduced people to skeletons.

Retrieved from "https://marvelcomicsfanon.fandom.com/wiki/Pumpkin_Bombs_2099?oldid=178288"
Community content is available under CC-BY-SA unless otherwise noted.