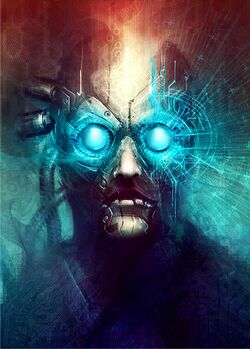 You Terrans keep calling me a "psychopath"... I say you're simply rejecting the necessary truth your kind has never figured out... The truth that emotion is a tool and weapon... The greatest one there is...

Psyste Vaxan was a Traanian genius but unethical chief scientist supreme and an unhinged, manipulative, and terrifying ruler of an great, inescapable regime government controlling more than fifty-seven planets within the Sub-Atomica system of the dimension known as the Microverse, able to be accessed via the energies of shrinking. According to the Elders of the Universe, Vaxan was an essential benefactor for the Allied Empire of Damnation during the Great Billion Years War in their clash against the benevolent Conservators of the Cosmos, which later on fragmented into the stronger and more improved Fragmented Successors of Peace. Realizing his allies' defeat Vaxan was one of the very participants who bailed the Allied Empire for his own future and safety moments before the final battle across the universe, analytically fearing that they're already doom regardless of whatever they do to fight off the returning peacekeepers. For the next billions of years, Vaxan experienced overpopulation on most his first colonies and feared the possibility of being overthrown by the countless empires he was conquering from time to time, he thoroughly analyzed and conclusively determined that it would be easier to cross other dimensions than to travel to other systems beyond the Microverse itself in order to save his people who were on the verge of experiencing panic and mass hysteria.

After realizing that he and his regime was already expecting to face a potential and inevitable revolt from his own oppressed people across the planets within the Sub-Atomica system, his servants began to beg at the conqueror Vaxan to immediately find an effective and consistent solution to the reoccurring predicament his supposedly collapsing reign was eventually gonna have to deal with. Throughout his entire life of using both his outstanding genius intelligence and scientific means of using his convenient inventions, Vaxan was able to achieve crafting a fully-functioning, technologically-advanced portable device, simply known as the Control Box, that was capable of influencing and manipulating people's emotions. There was no one to oppose him, except for those people who had enough willpower to barely reject his extremely-coercive device had escaped out of his homeworld into the greater regions beyond the Microverse, which some of them pursued a primary objective to establish a clandestine resistance known as the Enigma Force, and overthrow Vaxan's submissive, authoritarian rule. As a normal being with emotions would react with rage and frustration for some of his people's treachery, Psyste himself was a far different being compared to most mortals and immortals alike.

Reacting to the formation of the Enigma Force, Vaxan was rather amused feeling stoic instead of feeling disappointed, and was deluded with sympathy for his resistance as he only sees them to be who were "the most sick" among his people and needs a "greater medication" in order to treat them from their "negative emotions," which Vaxan strongly theorizes was the psychological root of their rebellion against his rule. In response to the escape of his resistance, Vaxan improved his work by risking his own life to genetically-engineer himself with assistance of his coerced scientific servants, merging his tech that was the Control Box into his system along with a few additional polishes which involved attaching his own iconic body armor and lastly, his teleportation device onto his body, upgrading his to the most advanced achievement his race has ever seen for the past millions of years on the Traanian civilization. Feeling unsatisfied by the fact that he couldn't "cure" the "ailments" of his rebels any sooner, Vaxan set his new goal to venture beyond the Microverse just as his resistors, most notably the Enigma Force, have and explore worlds who might also be needing his Control Box: his self-claimed "cure of emotion," which he now embodies within him.

Controlling the greatest of coerced warriors and intellectuals from the Microverse with his mighty and powerful abilities to rule over emotions, he successfully gathered enough pieces to build more and more empires and civilizations under his rule, only to have his efforts tried to be thwarted by the Enigma Force themselves, the greatest symbol and representation of his resistance. Personally encountering the very people he deemed as his "toughest patients" once more, Vaxan surprisingly thanked the heroic rebels for bringing themselves in order to bring down his tyranny. Vaxan confessed that he was fascinated by their altruistic personality, acknowledging the fact that the concept of "heroism" has piqued his attention for the very first time.

Looking over this, Vaxan admittedly perceived the very heroes he created like the Enigma Force as one of his greatest challenges among his countless achievements, though it also gave him an access to a greater he and his people has yet to discover since the Great Billion Years' War, and that was the access to the larger, normal universe. Unfortunate for the Enigma Force, Vaxan was still manipulative that he was as he was intelligent, thus they were too late to realize he was using them as leverage and distracted them long enough until Vaxan went into the great wormhole into the normal universe, getting there first before the Enigma Force could've had the chance to stop him from doing so.

Making his way onto the prime universe, Vaxan arrived on a technologically-advanced alien planet that was driven by war and destruction, fueled by its two main nations. Vaxan could only repress his emotions of disappointment, but his scientific mind suggests he could end it. Trying to find a way to solve the seemingly unending planetary crisis of global conflict, the ruler of emotions teleported in the middle of the very strip of land that separates the borders of the planet's two nations, suddenly introducing himself to its inhabitants with a peaceful demeanor. Filled with confusion, the two nations were proven to be hostile against offworlders and ended up firing their weaponry at Vaxan, unconsciously setting their differences aside to battle a greater threat than themselves.

Vaxan's theory on the unity of the opposites proved to be right, much to his amusement, now that he can their emotions into his palm. Using his superhuman empathy, Vaxan detonated a series of powerful sonic waves throughout the planet, submitting each and every denizen to his will through their emotions, thereby establishing his first dominion beyond the Microverse and into the universe. As he has done the same deed with most of his Microverse, Vaxan was now successful in ending the war on this planet, but at the cost of their wills having been broken (though bent would be the more accurate word) under his unifying coercion. Vaxan morbidly smiles in his achievement, as he senses more and more worlds who were just as chaotic and conflicted as this one was.

Mutated Traanian Physiology: Despite Vaxan and his entire race's mysterious nature and origins, he alone was already measured and stated to be a Cosmic Level Threat by Reed Richards and Sue Storm. As a genetic mutate, Vaxan possesses a paranormal form of entity which allows him to manipulate the emotions of others. Along with it, Vaxan also harnesses a limited form of telepathy as a result of his connection to manipulate emotions, which includes the application of giving his targets illusions based on their greatest of fears and regrets, though it is no match for his far superior power of being "empathetic."

Retrieved from "https://marvelcomicsfanon.fandom.com/wiki/Psyste_Vaxan_(Earth-61615)?oldid=265854"
Community content is available under CC-BY-SA unless otherwise noted.