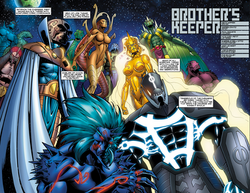 We are the true gods, little Nordic one. You and you fellow pantheons and elders are nothing but false imitations of us.

When the universe began, the first entities that came into existence were the Proemial Gods.

While Master Order and Eternity created the Celestials to accelerate life's development and the Demiurge made the spark of life for planets, the Proemial Gods seeded magic and divinity across the universe.

After completing their task, the Proemial Gods were horrified to realize they now seemingly had no purpose. Desperate to have meaning, the Proemial Gods "reinvented" themselves as Those-Who-Sit-Above-In-Shadow: the Gods that even Gods revere.

Class 100+: The Proemial Gods are more powerful than any Celestial, thus, their strength is easily solar-class

Retrieved from "https://marvelcomicsfanon.fandom.com/wiki/Proemial_Gods_(Earth-42180)?oldid=266912"
Community content is available under CC-BY-SA unless otherwise noted.