Prodigal is the fifth episode of Marvel's Young Avengers' Season Two and the thirteenth episode overall.

Vin-Tak started swinging his truncheon towards Wiccan, who dodged the blows. However, the Kree was able to knock the mutant out, erasing his mind.

-Billy, are you okay?- Hulkling asked, crouching next to him.

The Young Avengers rushed Wiccan inside the Avengers Mansion.

-What happened?- Scarlet Witch asked, running towards her reincarnated son.

-Does anyone here know anything about the Kree?!- Captain America yelled. -Why is Carol gone when we need her the most?-

-The Fantastic Four have had their run-ins with them, but they seem to be out of town.- Vision informed the group.

-That’s an excellent idea.- Captain America nodded. -I will communicate with the Professor.-

Walking inside the communications room of the Avengers Mansion, Rogers contacted Charles Xavier.

-Captain Rogers, nice to speak to you again.-

-The feeling is mutual, Professor, but we are facing some hardships.-

-Anything I can help you with?-

-We were hoping you could, yes. One of our Young Avengers, William Kaplan, was hit by some Kree artifact, making him lose his memory.-

-William Kaplan… He is a mutant too. We haven’t faced the Kree many times in the past, but I have someone in mind with enough alien knowledge to help you. I will send him to the Avengers Mansion early tomorrow morning.-

-My name is David Alleyne… But some call me Prodigy… My power is called psychomimicry… I basically can absorb knowledge from people around me subconsciously, as long as they’re nearby. And… And I’ve been a New Mutant for awhile now… And I’ve grown to love it. I am great friends with Josh and I’ve inspired Doug to leave the Hellions and join us. And for a… An unpopular guy like me, it takes awhile to get used to a new group. Then… Then the Professor told me I would be sent to the Avengers Mansion for awhile to join the Young Avengers and help them heal Wiccan with my limited Kree knowledge. I mean… I sure could investigate and hopefully heal him… But it could be so awkward. What if they don’t like me but have to bear me? How… How am I supposed to leave my friends? I would miss them all so much, especially Josh. Being roommates has brought us closer and… And I have no idea what’s going to happen to me next morning. I can just hope for the best.-

-Bro, what are you doing?- Elixir asked Prodigy, who was packing in the dark.

-Sorry man, I just have to pack… I am leaving in the morning to the Avengers Mansion.-

David smiled softly, put his suitcase under his bed and took his clothes off. However, when he got under the covers, he could not sleep at all. Six hours went by, but to Prodigy it seemed as if it had been 10 years. His heartbeat rate was above normal and anxious thoughts clouded his mind. “What if they don’t like me?” “What if I don’t fit in?” “How long will this be?” “What if the New Mutants replace me?”

Josh was woken up by David’s alarm clock. -Good morning, man.- He muttered, still half asleep.

-How long will you be away?- Elixir inquired.

Foley hugged his best friend tightly. -I will miss you, man.-

Prodigy teared up, hugging his roommate back. -I will miss you too, Josh.-

David hugged his teammates goodbye, gathered in front of the X-Mansion.

-It was always inside of you, Doug. You just… Realized it when you saw me.- Ramsey hugged him and David hugged his teammate back.

Magik suddenly appeared besides Prodigy. -Are you ready to go?-

Alleyne looked back at the Mansion and his teammates, as Professor X nodded at him. The New Mutant looked at the teleporter and pursed his lips. -I’m ready.- Suddenly, the two mutants disappeared.

J.A.R.V.I.S.’ security system set off as soon as the two mutants appeared suddenly inside the Avengers Mansion. Hulk, Wonder Man and Iron Man gathered around the two intruders.

-What are you doing inside my house?- Stark muttered.

Prodigy raised his hands, as Magik unsheathed her Soulsword.

-You should let me know before you invite people over to my house.-

-You mean OUR house… This is our home now.- Steve muttered.

-Yes, yes. Thank you for bringing him here.-

Illyana teleported away, and David looked at the spot where she disappeared for a brief second.

-H-Hello…- Prodigy muttered, looking at the Avenger’s hand. Realizing he had to shake his hand, he did so weakly compared to the Captain’s firm grip.

-Nice to meet you, kid.- The Captain nodded. -Follow me, I’ll introduce you to your new teammates.-

Walking inside the infirmary where the Young Avengers were gathered, Captain America cleared his throat.

-Young Avengers, this is your new teammate, David. David, these are Kate, Tommy, Nathaniel, Cassie, Teddy and that’s Billy.-

They all waved at him except Hulkling, who was looking down at his unconscious boyfriend.

Prodigy walked inside the room and headed next to Wiccan’s bed. -What happened?- He asked, feeling in his comfort zone.

Kate looked at Dorrek VIII. -Teddy, tell him.- She nudged him slightly.

Teddy looked up at Prodigy for the first time. -He was hit… By Vin-Tak’s truncheon. He’s… He’s a Kree. Not the first time I encounter him.-

David put his left index and middle fingers on his goggles, looking up Vin-Tak’s name in different classified files.

-S.H.I.E.L.D..- Prodigy muttered, turning his visor off. -They have faced him before. We need to ask them about whatever information they have.-

-That will have to wait.- Dr. Strange walked inside the room. -I need William for another mission.-

Hulkling gave him a killer look. -He is unconscious and lost his memory.-

After considering it for a second, the Doctor looked up at the teenagers. -I’ll give him his memory back.-

"The feeling is mutual, Professor, but we are facing some hardships." 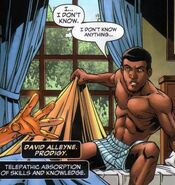 "What are you doing inside my house?"

"Young Avengers, this is your new teammate, David."
Add a photo to this gallery

Retrieved from "https://marvelcomicsfanon.fandom.com/wiki/Prodigal_(YA)?oldid=175379"
Community content is available under CC-BY-SA unless otherwise noted.