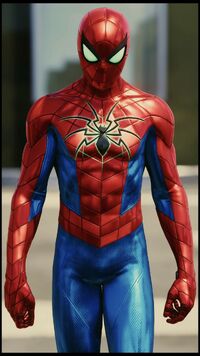 Brown
Unusual Features
Small hairs on his hands and feet that allow him to stick on any surface or walls.
Status
Citizenship

I've always been alone. No one to lean on when you have problems in your life. Always being in complete darkness, and no light is able to shine through. But now...I'm not the angry punk I used to be thanks to him. He has made me realize that I am not alone.

Prescott Benjamin Parker was born in Long Island, New York, to Malinda "Mary" Parker and Richard Parker. However, both Mary and Richard killed in a plane accident, leaving him under the care of his Aunt May and Uncle Ben. Much is not known about his parents, but when he was told that his parents' deaths, he managed to accept it because he sees May and Ben as his own parents and he was happy that they have raised him. As he grew up, Prescott or he's called "Peter" spent his life in the modest neighborhood of Forest Hills, New York where he had been around people both young and old, making friends along the away and even befriended the wealthy Harry Oborne. As he reached his teenage years, Peter's life changed drastically for him. Instead of making friends, he was bullied 24/7 by his peers, especially by Flash Thompson, who was the captain of the football team, the Midtown High Broncos, and he would torment Peter every single day which affected his self-esteem. But one day, Peter gets invited to the Oscorp Laboratory ran by Harry's father, Norman Osborne who welcomed him in open arms and introduced him and his class to a project in which he and his team were creating genetic-engineered spiders which one of the spiders have escaped and bit Peter, its venom infused with the Oz Serum began mutating his blood, granting him powers and abilities of a spider such as wall-crawling, superhuman strength, enhanced speed, and a sense of sudden danger which he would call 'Spider-Sense'.

Thanks to these powers, Peter's confidence started to return but not in the right way. After his little scuffle with Flash which the jock was left beaten and humiliated, Peter took the role of a wrestler to earn money, gaining a lot of popularity from winning every single match. This began to change Peter's demeanor and after getting confronted by both Aunt May and Uncle Ben about his behavior as well as his fight with Flash Thompson. This angered Peter and he lashed out at the two, storming out of the home. He continued on his wrestling career and one night, he had just finished another wrestling match and was on his way out of the arena until he hears a commotion on the other side, revealing to be a robber holding a bag of money while cops chased him from behind. Peter lets the robber escape and he was chastised by the officers, only for him to angrily jab back at them for 'not being fast enough' before leaving the arena.

A few hours later, Peter decided to head back home to face Aunt May and Uncle Ben once again until he spotted his home being surrounded by many police officers and barricaded by crime tape, changing his expression drastically. A police officer approaches him and delivers him the devastating news that Aunt May and Uncle Ben were both murdered in a home burglary, leaving him shocked heartbroken. After hearing where their killer was, Peter goes off to find him hiding at an abandoned warehouse and managed to beat him to the core. But when he removed his mask, his eyes widened in shock to see that it was the robber he let go. After being taunted by the robber, making fun of his aunt and uncle and their last hours leading to their demise, Peter goes into a rage and knocks him unconscious before walking up to the police, placing the suspect right in front of them and leaving the scene.

Peter was now orphaned and he was left with the guilt of letting the only family he had left be taken away by a man who didn't show any remorse in killing them. He was soon taken out of his home since he was only 15 at the time and was placed under foster care until he was taken under the wing of Norman Osborne, who found out about the murders of Aunt May and Uncle Ben. However, days after being taken in by Norman, who was going to fully adopt him, Peter leaves the Osborne estate despite Harry's protests, drops out of school and shutting himself out from anyone who became concerned about him.

Without a home, a family, and turning his back on school, Peter fell into the wrong crowd. He joined a gang called The 24 and he had gotten into many fights with other street gangs, using his spider powers to almost beat his enemies to death. He would also take the liberty to do drugs with his fellow gang members and collect deadly weapons. This led him to his first arrests by the police and he would leave the gang and continue on with his life on the streets for three years.

Then one day, Peter encounters what it happened to be a robbery which involved a group of thugs ganging up some wealthy man. He ends up fighting the thugs, saving the man from being mugged and when he got to see if he was okay, the man was revealed to be none other than Antonio "Tony" Stark, CEO of Stark Enterprises and founder of the super-elite force -- the Avengers, much to Peter's surprise. Tony thanked him for saving him, even though he was able to defend himself. But the conversation didn't last long as Peter soon leaves the man alone and didn't see him for the next few months, although the man kept an eye on him when Peter wasn't looking. Those months had passed and Peter gets into another fight with another group of thugs with the aid of his spider powers and pulled out a gun on one of the goons, leading him to his arrest.

After spending his time in jail, Peter was soon bailed out by Tony. The billionaire takes him out for lunch and Peter asked him why did he bail out of jail and Tony told him that he had been watching him in the streets fighting other punks and felt that he could do something better and he came up with the offer of becoming a hero after saving his life not too long ago. Peter laughed it off, thinking that Tony was just bluffing and rejected the offer, leaving the billionaire on his own once again although he thanked him for bailing him out as he left.

However, things began to change when he gets caught off guard when a villain named Scorpion attacks without any warning. Seeing the people running away from the tailed predator who inflicted havoc all over the streets of New York City, Peter swallowed his pride and saves the people before facing Scorpion. A battle ensued between the two and despite his abilities, Peter was brutally beaten by the Scorpion. Just as he was about to meet his demise, Peter was saved by Tony Stark who appeared as the invincible Iron Man. After defeating Scorpion, Peter rethinks his decision in becoming a hero, bringing a smile within Tony's face. With the help of his technology, Peter was given a new suit with advanced features and built-in web-shooters, allowing him to generate sticky webs to subdue other enemies. Peter will soon be given the title: The Dynamic Spider-Man

New Life and debut of Spider-Man

After going through the training with Tony, Peter puts his new abilities to the test when he hears that Scorpion has escaped thanks to one Tony's enemies -- Red Skull, who also had escaped from prison. Feeling a bit angered from the last beating from the tailed foe, Peter decided to pay him a visit at a local bank where Scorpion was robbing. Smirking, Scorpion unleashes his tail to attack him, igniting their second battle. The victims of the heist watched the web-slinger clash with Scorpion and began to wonder who he was. Peter overpowered Scorpion, stripping him out his tail thanks to his superhuman strength, claiming his first victory and earning recognition from citizens who asked him who he was and Peter simply answered, 'Your friendly neighborhood Spider-Man' before leaving the scene. Soon, headlines about the robbery came to light with newspapers and news lines, earning a fair amount of fans since the battle against Scorpion, but he also earned chastising from the Daily Bugle, mainly from its founder, John Jonah Jameson.

At the same time, Peter began to develop a relationship with Tony, whom he welcomed him into the Stark Tower prior to him becoming Spider-Man. And this was all new to Peter and it was hard for him at first because he had been isolated from the world since the death of his aunt and uncle, whom he still has regret for letting them die in the hands of the burglar and he would often try to distance himself from Tony, but the billionaire would get closer to him even though he did give him time for himself. Eventually, Peter began to let Tony into his life and keep him off the streets and out of the authorities' hair for he remembered the judge telling him that if he ever gets caught again, he will spend half of his life in jail.

His career began to rise as he continued bringing criminals to justice and even saving people from various disasters along with Tony Stark who remained at his side and guided him in his rising fame. Unbeknownst to him, his publicity caught the attention of S.H.I.E.L.D. director, Nick Fury.

Retrieved from "https://marvelcomicsfanon.fandom.com/wiki/Prescott_Parker_(Earth-7100)?oldid=255526"
Community content is available under CC-BY-SA unless otherwise noted.