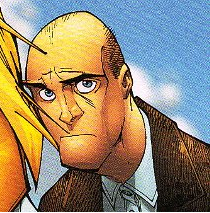 Politus has the same origin as his Earth-616 counterpart.

Politus, together with his wife Amir and Janus, stopped Loa and Crosta when they visited Atlantis to convince Namor so he could become a temporary partial host for the Phoenix Force.

Later, he informed the possessed McKenzie of an experimental generator that was being dropped into the sea at the Bronx. Enraged, the King set him on cosmic fire, disintegrating him.

Retrieved from "https://marvelcomicsfanon.fandom.com/wiki/Politus_(Earth-1010)?oldid=202971"
Community content is available under CC-BY-SA unless otherwise noted.