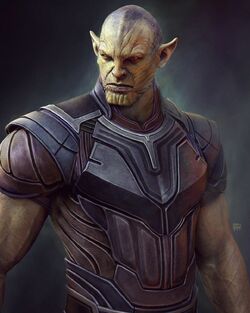 Humans are pitiful and weak... not to mention they are easily divided.

It made itself apparent in the form of Veranke, who rallied together a squadron of Skrulls and devised a plan to invade the Earth. Nili was sent to infiltrate the Avengers under the guise of Captain America, but was eventually discovered when Veranke was taken down by S.W.O.R.D. While Veranke escaped, Nili was taken into S.W.O.R.D. Custody, who handed him over to the Nova Corps.

Retrieved from "https://marvelcomicsfanon.fandom.com/wiki/Pitt%27o_Nili_(Earth-101)?oldid=262772"
Community content is available under CC-BY-SA unless otherwise noted.