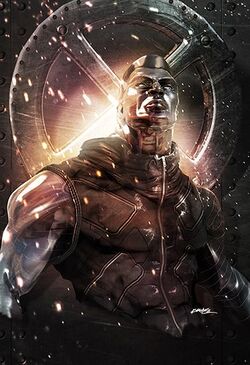 The Man of Steel
Identity

Let us go save the world, da?

Piotr Rasputin grew up on his family's farm in Russia, where he raised his little sister, Illyana. Eventually, they would both develop mutant abilities, which caught the attention of Magneto, who recruited them into the X-Men to fight against Apocalypse.

Since joining the X-Men, Colossus has become much more protective over his little sister, and also over several of the other younger members of the X-Men. He is always the first to put himself in harm's way to protect them, knowing that he can take it and give back just as bad. He is one of the only people to ever go toe to toe with the Horseman of War, and live to tell the tale, despite being beaten badly and going into a coma for five days.

Colossus would later meet an alternate version of himself when the Outsiders came to Earth-9999. The X-Men teamed up with the reality hoppers to finally take down Apocalypse once and for all. Once he and his Horsemen had fallen, Colossus joined the other X-Men in starting to rebuild civilization across the world.

Super Strength while in Steel Form

Retrieved from "https://marvelcomicsfanon.fandom.com/wiki/Piotr_Rasputin_(Earth-9999)?oldid=246134"
Community content is available under CC-BY-SA unless otherwise noted.