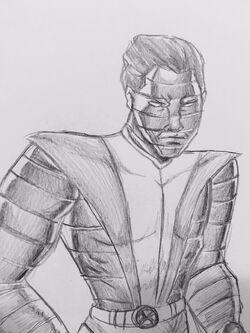 Piotr Nikolaievitch Rasputin was born on the Soviet collective farm, called the Ust-Ordynski Collective, near Lake Baikal in Siberia. Piotr loved his brother, Mikhail Rasputin, and his younger sister, Illyana Rasputina and would pass the time drawing or painting, as he was also a great artist. Piotr's superhuman powers emerged in adolescence. At first, Rasputin was content simply to use these powers to aid the other people of the Collective.

However, Rasputin was contacted by Professor Charles Xavier, founder of the X-Men, to join Xavier's School for Gifted Youngsters as a student.

Piotr participated in the Genoshan War with the rest of the X-Men.

Colossus is a mutant

Organic Steel Transformation: Colossus is a mutant with the superhuman ability to convert the tissue of his entire body into an organic steel-like substance. This substance resembling steel is of unknown composition but appears to be analogous to osmium and to carbon steel. He is able to transform into this armor-like state at will (the process is virtually instantaneous) and remain in that form for an as yet undetermined amount of time. (The longest time he has remained in armored form by choice so far has been five days). Once in his armored form he remains so until he consciously wills himself back to normal. If he is rendered unconscious, however, he spontaneously reverts to his normal form.

While in the armored state, Colossus possesses the same degree of mobility that he does in his normal form. The conversion from flesh and bone to organic steel is accomplished by a psionic whole-brain interface with an ionic form of osmium, an extremely dense metal, located in another dimension. In willing the act of transformation, Colossus actually exchanges osmium atoms for his carbon atoms. The psionic interface with the other dimension re-creates all of Colossus's body in functionally similar organic ionic-osmium materials. The process by which Colossus gains additional mass from an unknown, perhaps extra-dimensional, force remains unknown. Colossus cannot become partially or selectively armored; his body is either entirely converted or not.

Expert Combatant: Even though Piotr has a gentle demeanor and personality, he is a skilled hand to hand combatant, having received some training.

Exactly class 100. Formerly class 70. Also even without transforming into his metal form Piotr possesses the strength of a human of similar age and build who engages in regular extensive exercise, as a result he can lift up to twice his body weight . Piotr can press lift 700 lbs in his normal form.

Just like all metal in the Marvel universe, Colossus's metal skin is vulnerable to the anti-metal Vibranium. Colossus instinctively turns back into his normal form when he comes into contact with something made of Vibranium. He can also be damaged when he is attacked by something made from or bonded with a stronger material (e.g. Wolverine's Adamantium bonded claws).