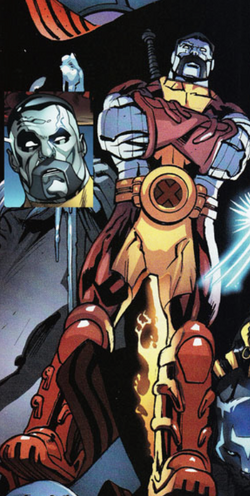 Earth-7081
Base Of Operations
The Outside
Characteristics
Gender

I understand how it is to lose those you love. I also understand the importance of not letting that loss consume you... for you will lose yourself as well.

Piotr Rasputin grew up on his family's farm in Russia, essentially raising his little sister, Illyana. He would eventually be recruited by Charles Xavier to join his team of mutant superheroes the X-Men. Piotr worked with the X-Men for years. He eventually discovered that Illyana had developed mutant powers as well after accidentally traveling to Limbo and claiming the Soulsword. Piotr was against her joining the X-Men and putting herself in harms way, but she joined anyway. His fears were realized when one day she perished on a mission against Doctor Doom. Consumed with guilt, Colossus donned the Soulsword for himself and deciding to learn sorcery in order to honor his sister.

He would eventually be recruited into the Outsiders under the threat that if he returned to his reality, Magik's soul would manifest within the Soulsword and haunt Piotr for eternity. Colossus quickly becomes a seasoned member of the Outsiders and even forms a brotherly relationship with Firestar and Polaris.

Retrieved from "https://marvelcomicsfanon.fandom.com/wiki/Piotr_Rasputin_(Earth-7081)?oldid=246133"
Community content is available under CC-BY-SA unless otherwise noted.