Ever hear of the Man of Steel?

Piotr Rasputin grew up on a farm in Russia, and eventually developed his mutant powers that allowed him to cover his skin in steel. He was later recruited by Charles Xavier to join the X-Men, and eventually ended up joining the Ultimate Alliance to fight against the Cabal. 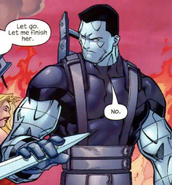 Battle of the Atom
Add a photo to this gallery
Retrieved from "https://marvelcomicsfanon.fandom.com/wiki/Piotr_Rasputin_(Earth-6110)?oldid=252137"
Community content is available under CC-BY-SA unless otherwise noted.