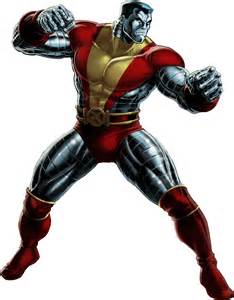 Little is known about Colossus's life before the attack on the S.H.I.E.L.D. Alpha Helicarrier by the Masters of Evil. It can be assumed to be similar to his mainstream counterpart.

Colossus is part of the team that battles Doctor Doom before & after he gains Odin's powers. Colossus got back from his trip to Russia and found Weasel in the kitchen and started beating him up. Luckily for Weasel, Karma managed to get between them and explain who Weasel was and Weasel mentions earlier that Beast (or the "Big Blue Ape" as he calls him) kept asking him when he's going to leave. Unfortunately he is defeated along with the rest of the team. He is the first hero to be taken over by Doom when he discovers that he can use Odin's power to corrupt minds. When Nick Fury's team of heroes attacks castle Doom, Colossus confronts them along with a dark version of Captain America. He is defeated and is presumably returned to normal when the heroes defeat Doom and Odin regains his powers.

During the Superhuman Civil War he sided with Captain America's Anti-Registration team and his White Star guerrilla army, strongly believing that no mutant could possibly justify Registration. Colossus was one of the many among the White Star who were ambushed at Stark's chemical plant, where he and Dagger defended against an elite team of Pro-Registration heroes, though they were defeated. He was taken under the control of the Nanites of the Fold when they began to conquer the world, and was a member of a team which was titled as the "Insidious Alliance." He was presumably freed from their control when the Nick Fury under the Fold's control and the main control spire was destroyed.

Colossus was an active participant against the Skrulls during the Secret Invasion.

Just like all metal in the Marvel universe, Colossus's metal skin is vulnerable to the anti-metal Vibranium. Colossus instinctively turns back into his normal form when he comes into contact with something made of Vibranium. He can also be damaged when he is attacked by something made from or bonded with a stronger material (e.g. Wolverine's Adamantium bonded claws).

Retrieved from "https://marvelcomicsfanon.fandom.com/wiki/Piotr_Rasputin_(Earth-6109.2)?oldid=125726"
Community content is available under CC-BY-SA unless otherwise noted.