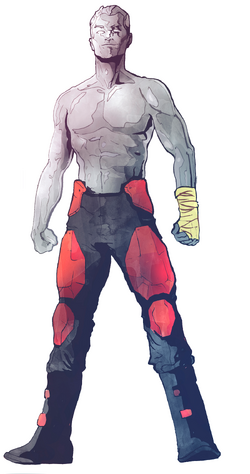 Black, Silver in metallic form
Skin
Silver
Unusual Features
Covered in metal due to his mutant powers, unable to change back due to experimentation.
Status
Citizenship

Feel the wrath of Mother Russia!

Piotr was the eldest son of the Rasputins, a Russian family of immigrants, consisting of his father Oleg, his mother Svetlana and his youngest sister Illyana. Four years after they moved into America, Svetlana died of cancer, and both Oleg and Piotr worked in the Meatpacking District of NYC in order to bring food to the table. Tragedy hit the Rasputin family again when Oleg died in a factory accident, so he now must take care of his 10-year old sister Illyana. The money he gained from the factory wasn't enough to provide for his sister, so searching for another job, he ended up tackling a robber with a powerful forearm tackle (known in wrestling as a clothesline)

The guy Piotr tackled was robbing a wrestling scout who saw Piotr's size and potential so he decided to reward him by giving him a chance to work in his independent wrestling company. At the age of 18, he started as a jobber (a guy who always loses in order to raise the popularity of his rival) but after a year, his strength was growing enormously, becoming a powerhouse that his rivals could barely flop on the floor. During a match, Piotr went for a punch, but he unknowingly knocked him down with a broken jaw and a sudden metallic shine appeared in Piotr's fist, which landed him a disqualification for using a brass knuckle. The crowd booed him and Piotr went straight back to his locker room where he found out to his shock that his knuckles were covered in metal but suddenly they were slowly becoming skin again. Fearful of getting fired, he tried to quit, but his manager insisted on him staying with a bigger paycheck, now with his character established as a Heel (a villain wrestler).

Piotr stayed in the wrestling company, now taking the moniker of "The Russian Colossus" and being an undefeated wrestler who resorts to knock down his opponents. In his spare days he started training and developing his newfound mutant abilities, now managing to cover his arms into metal. Piotr decided to keep the metal arms as part of his "Wrestling Outfit", but during another match, he went for a bear hug to his opponent and not realizing of his strength, ended up breaking his spine. After the incident, Colossus was released from the company with his last paycheck going to the medical bills from his rival. Later that day, he received a phone call where his former boss told him that he might be facing legal actions from his rival for deliberately injuring him, but in the middle of his outburst during his phone call, he didn't realized his little sister was near and he accidentally punched her straight into her head with his metal covered fist. After he rushed her to a hospital, the doctors told him that the punch left her into a coma and with injuries into her head, which meant that she would have to be sent into surgery but the cost his highly expensive and his paychecks have been blocked after being fired. Ashamed for what he did, he went to a bridge, and forced his powers to envelop his entire body into metal, swearing to never return to his human shape again, but before he could leave, he was ambushed by a group of thugs led by his injured rival, now in a wheelchair. He reveals that his father is a Russian mobster called Arkady Rosovich, whose Omega Family is a prominent name in the criminal underworld, earning him the monicker of "Red Leader". His thugs managed to amazingly neutralize Colossus with electricity so they can capture him and experiment on him.

Found and Saved by the X-Men

After two weeks of captivity, Piotr manages to escape the place, but to his shock he discovers that he can't turn back into human shape. The Omega Family gives chase and Colossus tries to face them, but days of starvation left him weak, only to be saved in the nick of time by Xavier's group of mutants led by Cyclops who defeated the family forcing them to flee the scene. Piotr thanks the group and Xavier approaches to the young Russian to talk about his mutant abilities and offers him his help to regain his human shape. Piotr tells his story about his sister's coma and remembers that he forgot to visit her, but Xavier calms him down telling him that Illyana is safe, yet still in a coma, but as an act of good faith, he will try his best to help her, making Colossus happy enough to accept Xavier's offer of joining. However, Xavier knows a secret about Illyana: She's also a mutant, but her powers haven't developed due to her coma.

Retrieved from "https://marvelcomicsfanon.fandom.com/wiki/Piotr_Rasputin_(Earth-120986)?oldid=53139"
Community content is available under CC-BY-SA unless otherwise noted.