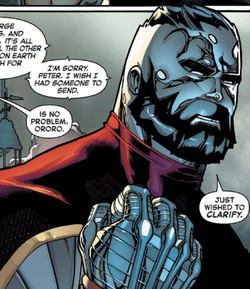 It is time to be kicking ass and changing the future, no?

Raised on his family's farm in Siberia, Piotr Rasputin was always the food provider for his family. He and his parents were not close, but he would dedicate his life to protecting his little sister, Illyana. However, his parents eventually discovered him in bed with another man and disowned him, but not before beating him. The beating resulted in his mutant powers manifested, as his skin became coated in steel, which shattered his father's hand.

Forced to abandon Illyana and go on the run, he immigrated to Europe where he was forced to get involved in a life of crime to support himself. He was used by the mob to be their man to always make exchanges so that if there was ever a double cross, he could survive it and beat whoever attempted to betray them. Legends of a metal man in Europe eventually caught the attention of Charles Xavier, who came to visit Piotr. After making a psychic connection so they could understand each other, the two formed a connection, and Piotr was ecstatic to come with Xavier and be among people like him.

He was then welcomed into the X-Force and quickly became a prominent team member. He became best friends with Wolverine, and briefly developed a crush on Angel, which he eventually got over. Eventually, when X-Force went up against Apocalypse and his Horsemen, Colossus was dedicated to save them, not only because he was close with Angel, but also because his little sister, Illyana's mutant powers had manifested, and she had been transformed into the Horseman of War.

After the battle was won, Angel and Magik both came back to the Xavier Institute. Colossus was ecstatic to have his sister back, and instantly became overprotective of her once more. He was hesitant when she began a relationship with Kitty Pryde, but eventually he accepted that if anyone else could treat Illyana the way she deserved, it was Kitty. He even came to see her as a little sister as well.