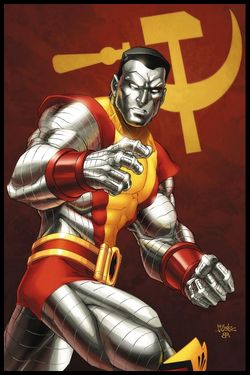 Dating
Occupation
Member of the X-Men (formerly)
Member of the Russian Wrestling League (formerly)
Lumberjack (currently)
Member of the Avengers (currently)
Education
College-level education
Origin
Origin
A mutant from Russia, Pietro participated in the Russian Wrestling League until he was offered to join the X-Men by Professor X where he fought against Magneto and the Brotherhood. After the disbandment of the X-Men, Pietro joins the Avengers, giving heroism a second chance.
Place of Birth
Moscow, Russia
Creators

True strength isn't your muscles, it's your heart and your mind.

Pietro Vladimir Rasputin (Russian: Петро Владимир Распутин) is the son of Alexandra Rasputina and Sergei Rasputin born in Moscow, Russia. During his childhood, his parents didn't have much money afford to the luxurious necessities but they had enough to keep themselves warm in the harshest winters. His father was the breadwinner of the family, working as a steelworker while his mother took care of him and his younger sister, Illyana. During his childhood, Pietro began to experience bullying from other kids due to them being poor, resulting in beatings from them while Illyana watched defenselessly. His mother would try to comfort him but his father would coldly chastise him for being weak which would damage him mentally.

After experiencing bullying throughout his years, Pietro decided that enough was enough and decided to train himself in combat with the help of his mother who would take him to box to boost up his confidence. He was only a teenager when he wanted to defend himself and the people around him but when he tried to box, Pietro wasn't able to keep up with the trainers and was forced to quit boxing which damaged his spirit more. The bullying and his father's harsh treatment towards him would sink him into a deep depression. However, he met a young man named Vitaly who found him and asked him what was wrong and Pietro would tell him about his problems. Soon, they began to develop a strong friendship and he would help him train to become stronger. By the time he was ready, he was met by his childhood bullies once again. The leader of the bullies taunted Pietro for his life as a poor person and in result, gets punched by Pietro, not even realizing that his hands turned into titanium much to his shock and his happiness. His bond with Vitaly would eventually become close and Pietro realized that he has feelings for him and they would secretly start dating due to his father's traditional views.

But Pietro was caught by Sergei who finds him kissing Vitaly and goes into a rage. When he tries to attack Vitaly for "brainwashing" him, Pietro stopped him from attacking and his mutant powers began to fully surface, his whole body transforming into organic titanium and punching his father in the face, nearly breaking his jaw. Sergei dismisses Pietro as his son, forcing him to leave the home and Vitaly behind who was left heartbroken.

After fleeing his home and leaving his first love behind, Pietro spent his days in the cold streets of Moscow, hoping that people would come and help him but due to his mutant powers, no one came close to him for they were told about the mutants and how dangerous and savage they were. It wasn't until he met a man named Miroslav "Miro" Alekhin who is the promoter of the Russian Wrestling League or the RWL and was amazed at how buff Pietro looked. He offered him to join the wrestling team and Pietro eventually accepts the offer despite not knowing anything about the wrestling world. But when he was welcomed into the RWL, many of the experience wrestlers were skeptical despite his fit physique. Undergoing many challenges, Pietro was able to take on Russia's greatest wrestlers, eventually to gain acceptance in the ring.

At the beginning of his career as a wrestler, he made his debut and gained a reputation after he began to use his powers to fight the strongest wrestlers all Russia and across Europe. He was also provided hot meals and a warm place to sleep, something that his now ex-family had struggled to earn during his youth and he became close to the fellow wrestlers, earning the nickname, Colossus due to his tall structure being 6'8". However, his career would come to a screeching halt, when Miro was tracked down by the Serbian mafia who owes them millions of dollars in debt. Pietro eventually defends Miro, confronting the mafia but when they refused to back down, he transforms into his mutant form, beating down every single member of the mafia until they retreated. This caught the attention of Professor Charles Xavier who walks up to the aftermath. When he mentally linked to Pietro and saw the future potential within him, he offers him to join the X-Men and Pietro highly accepts, realizing that he had been taken to something bigger. After making his final appearance as a wrestler, he bids farewell to his wrestling family and flies to America.

The X-Men and its Downfall

Pietro arrived with Xavier at New York City where he meets the X-Men led by Scott Summers aka Cyclops and met other mutants like him such as Storm, Beast, and Wolverine. He even met newer mutants such as Nightcrawler, Shadowcat and Iceman. He eventually got along with them very well and developed a crush on Bobby but the latter was in a relationship with Northstar at the time. As the muscles of the group, Colossus began to take on the Brothrhood of Evil Mutants led by Magneto and even took other superpowered villains such as Rhino and Thanos. Pietro was a very kind soul within the X-Men, developing a brotherly bond with Shadowcat and Nightcrawler and became a dedicated member, taking pride in being a mutant who wants to protect humankind.

However, the X-Men began to have tension within each other, and Pietro would stumble upon Bobby who wasn't in his best mood after Jean-Paul had broken up with him for Kyle Jinadu, a Nigerian college senior in Toronto. Finding him in a bar, Pietro tried to help him get back on his feet, causing Bobby to physically lash out at him, calling him a "f*cking brute" in drunken anger before storming out of the bar, leaving Pietro hurt. As the years passed, the X-Men, unfortunately, disbanded after the tension and infighting reached its breaking point, much to Pietro's disappointment. Since his wrestling days are also over, Pietro began to take a job as a lumberjack, cutting down trees and delivering them to make wood for houses and other projects. It wasn't until later on, he finds Bobby, his state now at its worst. He discovers that Jean-Paul and Kyle had gotten married, causing the ice mutant to sink into a deeper depression. Refusing to stand any longer, Pietro eventually took the liberty in slapping Bobby back into his senses. Yelling and flurries of insults were flown at Pietro but the titanium mutant refused to leave his side. Bobby eventually breaks down in tears and Pietro embraces him tightly before giving him a passionate and comforting kiss, leading the two in having sex that night. The next morning, Pietro was approached by Bobby who apologized for his behavior. Pietro forgives him, telling him that he had been in love with him since day one, leading to them sharing a romantic kiss once again, beginning their relationship.

Pietro continued his life as a lumberjack after the dismantlement of the X-Men, and the beginning of his romantic relationship with Bobby until he hears about the fame of Spider-Man and his battle against the Green Goblin as well as joining the Avengers led by Captain America and Iron Man. At first, Pietro didn't want any part of heroism because of what had happened with the X-Men until his job was attacked by the HYDRA, its superpowered villain team wreaking havoc around the area which put most of his co-workers in danger. Refusing to take any more of their terrorism, Pietro ends up transforming into his mutant form, overcoming every single villain including Doctor Octopus with the knowledge and experience of a wrestler. The leaders of the Avengers were amazed by his battle against the HYDRA villains. When asked, Pietro tells that he is Colossus from the X-Men, which brought shock to his co-workers. Hearing about what had happened to the X-Men, both Captain America and Iron Man decided to give Pietro a second chance in heroism by offering him to join the Avengers. It didn't take long for Pietro to accept the offer and be welcomed back into the life of being a superhero.

Retrieved from "https://marvelcomicsfanon.fandom.com/wiki/Pietro_Rasputin_(Earth-7090)?oldid=265311"
Community content is available under CC-BY-SA unless otherwise noted.