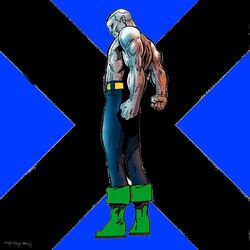 Colossus and Polaris never loved each other. In fact, they barely liked each other. But, Magneto insisted he needed power for the new era of heroism the world was presenting. So he drugged Polaris, making her interested in Colossus. This was the first part of his downfall, which included killing X-23 and framing Polaris for the deed. Soon Polaris discovered she was pregnant. When Magneto went public with his villainy, he killed Quicksilver. Polaris had the child, and named it after Quicksilver for his death. Colossus soon revealed it was his son, and the child was fully named: Pietro Rasputin.

Since Polaris was still believed to be X-23's murderer, she fled, leaving Colossus with his child. He loved him, despite the fact that he was trapped in his metal form. He raised the child as best as he could, teaching him to paint and fight. And, on his 13th birthday, his secondary mutation kicked in, and he turned fully human. So was he blessed with the ability to control his transformations. He loved his new life. But inside, he still had lingering guilt that his mother was gone, despite the fact that he had nothing to do with it. So, he joined the CIA, and did some international black-ops work using his new powers, while trying to prove his mother innocent on the side.

Eventually, he got a telepathic call that he was made to believe was from the President of the U.S. However, it was just Psi-Lord. He answered the call, and flew to New York. There, he found an X-Men rescue team being formed. Mercury had long wanted to get the confidence to return, so he gladly joined the rescue squad and flew into space to save them from the Skrulls. He had a terrific time, saying "Skrulls are more fun than terrorists." After returning to Earth, Mercury was properly made an X-Man.

Organic Steel Transformation: Pietro has the ability to convert his body into organic steel. This allows him many powers.

Superhuman Strength: Mercury is capable of lifting 80 tons in his armored form.

Invulnerability: Mercury is so far only able to be harmed by magic.

Total Bodily Control: In his armored form, Pietro has total control over his molecular structure.

Elasticity: Mercury can flex, bend, and stretch any way he wishes.

Liquid Form: Mercury can liquidate his body into a puddle. He has created a move where he splits up into hundreds of shards and attacks the enemy.

Magnetokinesis: Mercury has minor control over metal objects, which he is not working on developing.

Retrieved from "https://marvelcomicsfanon.fandom.com/wiki/Pietro_Rasputin_(Earth-1175)?oldid=59198"
Community content is available under CC-BY-SA unless otherwise noted.