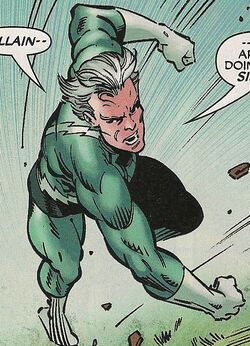 Quicksilver's history is likely the same as that of his Earth-616 counterpart up until the events of the Twelve.

He was one of the Avengers who disapproved of Scott's name change when he became the Avenger. As such, he received the brunt of his assault when he reached the Mansion. He ultimately ran away from the battle to save himself, and ultimately tried to undo the events of the past by running in the reverse direction of the Earth's rotation.

Retrieved from "https://marvelcomicsfanon.fandom.com/wiki/Pietro_Maximoff_(Earth-875)?oldid=101133"
Community content is available under CC-BY-SA unless otherwise noted.