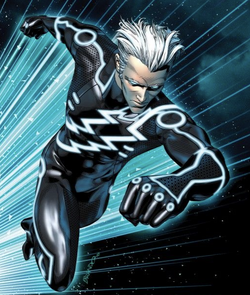 Earth-6644
Base Of Operations
The Outside
Characteristics
Gender

No matter how fast I run, it seems I could never outrun the inevitable.

Quicksilver and his sister, Scarlet Witch, left the Brotherhood of Mutants to become Avengers. Tragedy struck the Avengers when Quicksilver, Iron Man, Captain America, Black Widow, Thor, and She-Hulk all get trapped in a time bubble by Kang the Conqueror, emerging in the year 2099 and seemingly unable to return.

Quicksilver was recruited into the Outsiders under the threat that if he returned to his reality they would be flung even further into an apocalyptic future.

Quicksilver would end up sacrificing himself on the Outsiders' first mission to Earth-1010112 where Atlantis and Latveria were at war. Quicksilver and Hulk both sacrificed themselves by taking positions in each nation to ensure the crippling of Namor and Doom's empires.

Retrieved from "https://marvelcomicsfanon.fandom.com/wiki/Pietro_Maximoff_(Earth-6644)?oldid=244596"
Community content is available under CC-BY-SA unless otherwise noted.