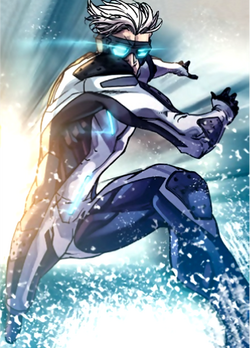 Pietro Django Maximoff was born around the early 1980s at the Wundagore base of the High Evolutionary, she and her twin sister Wanda were the children of Romani couple Django and Marya Maximoff. The High Evolutionary supposedly abducted the twins when they were babies and experimented on them, once he was disgusted with the results, he returned them to Wundagore, disguised as regular mutants. As adolescents, Wanda and Pietro discovered that they had unusual superhuman abilities.

When a group of raiders terrorized and raided their village, Pietro's home were robbed and his parents were murdered. Using his phenomenal speed, Pietro fled from the camp with his sister. The circumstances of their losing their parents were so traumatic that not until well into adulthood could they remembered anything but the barest details of their childhood. For the next few years Wanda and Pietro wandered central Europe, living off the land and traveled to America, were they were adopted by a man named Erik Magnus and started live a new life there.

They were later recruited into Magneto's Brotherhood of Mutants and, as the Scarlet Witch and Quicksilver, fought the X-Men on several occasions. At the time, none of the them were aware of the siblings' paternity. They remained in the group until they were confronted by the X-Men.

The Brotherhood manages to triumph the X-Men in battle due the combination of Wanda and Pietro's powers, but was been defeated after Jean Grey reveals to them the truth about the Brotherhood and how dangerous they were to society, especially since they first joined. The twins were shocked and decided to stop the fight between teams and finally left the team and their long-time guardian, Magneto and started living a new life in New York City where they went into Empire State University and finished their college education there.

There, he (who is now under the name of Peter Frank) and Wanda met several people such as Peter Parker, Felicia Hardy (who are secretly the masked vigilantes known as Spider-Man and Black Cat, and would eventually become their teammates in the future as an Avenger) and their friends, such as Mary Jane Watson and Harry Osborn. They became very good friends for years, until his friendship with Peter has been damaged due to him breaking his sister's heart, since Peter was revealed to still have feelings for Mary Jane. Eventually after their college graduation, Pietro and Wanda bought an apartment in Manhattan, where the location of the famous Stark Tower of Tony Stark is found, and lived their lives there in the city as normal young adults, hiding their powers and abilities from the face of society.

Following the incidents when the rogue Asgardian Loki have finally stolen the Tesseract from S.H.I.E.L.D. and declaring war on humanity on behalf of his secret situational master, Wanda was horrified to accidentally learn of Loki's intentions after feeling a vergence within her own "cosmic senses," which involved the genocide of humanity and the envisioned invasion of Earth. Helping the new superhero team dubbed as the Avengers which had been made up of some of the Earth's Mightiest Heroes at the time, along with the then-outlawed but heroic Defenders, Pietro and his sister Wanda actually played a barely noticed but still significant role in the Battle of New York, successfully stopping the Chitauri Invasion of Earth while saving thousands of lives in the process, capturing Loki after his humiliating defeat by the Avengers.

In the aftermath of the chaotic Battle of New York, Pietro privately celebrated their victor with his sister and some of their friends, although in reality it was just a party held by their friends as they barely survived the crisis in New York on that day. Eventually, both Pietro and Wanda would become one of the first members of the Avengers post-Chitauri Invasion right after her and Pietro's superhuman presence were eventually detected and recognized by the team themselves, noticing their braveness and nobility during the Incident. After S.H.I.E.L.D. temporarily became a defunct agency due to the events of Hydra Uprising, Stark Industries remodeled Stark Tower into Avengers Tower and the team joined the fight against the remaining remnants of Hydra across the globe, in which Pietro and Wanda had willingly participated in to end the threat of the terrorist organization.

After they finished the war, Hank Pym's invention and the Avenger's ally, the A.I. Ultron unexpectedly deemed humanity itself as the greatest threat to peace on the Earth and attempted to create his technological singularity by committing genocide against them, leaving only his own sentries left in his wake once it becomes a success, only for him and his plans were then foiled by the Avengers. When Ultron was presumably destroyed, the team gained new recruits and relocated to the New Avengers Facility, serving as the field headquarters of the Avengers, though the Avengers Tower remains active nonetheless.

As the attacks all over the world have continued for days and then weeks, more and more casualties are sadly, starting to increase in numbers, due to the extreme terrorism and serious devastation, continuously committed by the conflict between the Movement Alliance and its seemingly unstoppable forces against the combined forces heroes and anti-heroes of the world, the Ultimate Alliance, who are not stopping their fight against the villains until they find a way to make them pay for their irreversible actions and restore back peace in the entire world. At some point later on, months after Ultimate War, Pietro and his close friend Jubilee would unexpectedly be engaging in a physical relationship to slowly relieve the unending stress and trauma that they've experienced in the conflict, but eventually, they started dating as a committed couple once they've realize their intimacy was more than just being physical with one another.

Speed Physiology: Quicksilver gained the ability to run at extremely high speeds due to High Evolutionary's experiments of using Artificial Evolution, with the help of an unknown type of multidimensional energy force, which would be later revealed as the mysterious Power Primordial, he had discovered after experimenting the Infinity Stones. This unknown force also seems to serve as the source to of all his speed and powers. Pietro's body is adapted towards the rigors of high-speed running. His cardiovascular, respiratory, and central nervous systems are many times more efficient than those of a normal human being, superhuman, or even those of a mutant. He metabolizes an estimated 95% of the caloric energy content of foodstuffs (normal humans use about 25%).

Retrieved from "https://marvelcomicsfanon.fandom.com/wiki/Pietro_Maximoff_(Earth-61615)?oldid=267188"
Community content is available under CC-BY-SA unless otherwise noted.