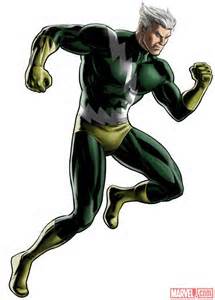 Little is known about Quicksilver's life before the Civil War. It can be assumed to be similar to his mainstream counterpart.

Pietro was one of the heroes that were assimilated into the Fold. He along with Magneto fought a team of heroes from the Ultimate Alliance, having been summoned by the Tinkerer. While Tinkerer is defeated, Magneto & Quicksilver are freed.

Several months after that, Pietro was captured by the Skrulls. However he was freed by the Living Laser & a squad consisting of Spider-Man, the Sandman, Daredevil, and Wolverine.

Pietro, along with his sisters, appears to have inherited his father's propensity for mental illness and depression. Pietro has undergone mental breakdowns, episodes of mental illness, and severe depression.

Retrieved from "https://marvelcomicsfanon.fandom.com/wiki/Pietro_Maximoff_(Earth-6109.2)?oldid=128888"
Community content is available under CC-BY-SA unless otherwise noted.