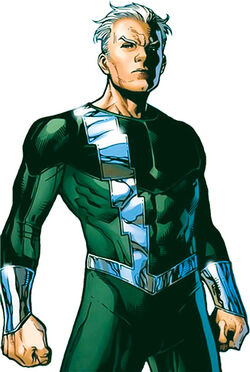 All my life, I've been running away. From friends and family. Then, HYDRA found me. They promised me power. Now, because of you people, I know, I was working for the wrong side.

Pietro Maximoff was born in St. Petersburg, Russia, to two fairly wealthy parents. Pietro's mother and father were both entrepreneurs. Although Pietro was told to pursue his dreams as fast as he can, Pietro was rebellious. Always known for his speed and agility, Pietro was more of a "parkour-man", who always ran away from his home. As such, in his education career, he frequently got into trouble, but he saw that he can use his "speed and agility" for something else. Pietro joined several marathon/sprint competitions, and frequently won. However, still, Pietro was rebellious.

When Quicksilver advanced to an older age, he began to left his family, and tried to find a job. Failing many times, Pietro ran away in a fit of stress and rage, and attempted suicide. However, a man stopped his suicide attempt. This man was actually Red Skull, in disguise. He told Pietro that his life was priceless, and killing himself would be a useless act. Pietro then told the disguised Red Skull that it's none of his problem and his life's worthless. However, Kleiser told Pietro that he knew who he is, and his "speed and agility" could be used for another... "act". Pietro and Kleiser got locked in an argument, but stopped after the White Runner accepted Kleiser's offer to "enhance" himself.

Kleiser brought Pietro into a bunker. This bunker would later be identified as HYDRA's main base of operations, after HATE "disintegrated" them. Pietro, surprised but "defenseless", was told by Kleiser about HYDRA and revealed his true "form", of Red Skull. Pietro was then experimented upon by HYDRA scientists, and was made as HYDRA's first superhuman agent. Pietro was put under heavy stress to activate a "hidden power gene" that has been theorized by Arnim Zola, that every human possesses a "power gene" hidden inside them, and can only be activated through heavy stress. Pietro was inflicted with heavy pains and trauma, until one day, his "power gene" surfaced, proving that Zola's theory was right. Pietro later gained superhuman speed as his power, and was surprised. Thanking Kleiser, Pietro pledged his loyalties to HYDRA. Kleiser later told Pietro that his powers would be beneficial to both HYDRA and himself.

After his mutation, and becoming an agent of HYDRA, Quicksilver saw his first mission in HYDRA's assault at the HATE Helicarrier UNN "Gamma". Unknown to him and HYDRA, the Helicarrier was the current place where the "Avengers" were in, right after their mission in recruiting the Juggernaut. In the Helicarrier, an undercover HYDRA agent was present, who secured the whole Helicarrier for the assault (which was planned for a long time). Then, HYDRA's plan commenced. After "distracting" the Avengers and HATE personnel, Quicksilver makes his first appearance to HATE when he dispatched multiple HATE agents in a "silver streak". Pietro found himself fighting three Avengers members. Rescue, US Agent and Boomerang. Pietro managed to defeat all of them, until US Agent knocked him out.

After the HATE Helicarrier "forcefully landed" in a stadium, the HYDRA agents left before the Helicarrier fully crashed, but Quicksilver didn't make it to follow Herr Kleiser in the escape. Luckily, he was "saved", and was kept as a "temporary prisoner". When Quicksilver recovers, he saw a surprising sight of HATE director, Dirk Anger down on his knees, crying. However, later he got back up and rallied the Avengers, declaring US Agent the leader, and they must wipe out HYDRA, and prove themselves to the world. Quicksilver, feeling guilty, then said that he'll do anything to hunt down HYDRA, as he already saw what they've done, and that they're nothing but blood-thirsty terrorists, and he joined them because he's desperate, and delusioned. After the Avengers heard that, Juggernaut responded by patting Pietro's back, telling him that "he has done a nice little speech". After all of that, Quicksilver was integrated to the Avengers, later becoming a member.

Quicksilver is able to lift up to 250 lbs. His strength is at peak human level.

Transportation: His own superhuman speed.
Weapons: None