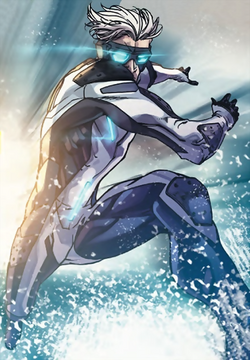 You know, I bet if I trained hard enough I could outrun this so-called destiny.

Pietro and his twin sister, Wanda, were born to a pair of outlaws who took refuge in the mysterious Wundagore Mountain, and cared for by an equally mysterious being called the High Evolutionary. Their mother died in childbirth, which resulted in their father abandoning them and going back on the run, leaving the babies in the possession of the High Evolutionary, who almost immediately began experimenting on them.

It wasn't long until he discovered that Wanda and Pietro carried Inhuman DNA, and he exposed them to Terrigenesis when they were only 3-years-old. Pietro instantly began showing signs of powers, constantly moving at super speeds. However, Wanda did not yield the same results, which caused the High Evolutionary to put most of his focus onto her. Pietro eventually became fed up with this and began snooping through the High Evolutionary's records to find his family. He couldn't find anything on their parents, but he did locate their Aunt Marya and Uncle Django not too far away from the Mountain.

Pietro took Wanda and ran them to their family, who took them in and tried to raise them as their own children. It was then that Wanda began showing signs of powers much more intense than Pietro's. The people of their village began rallying against the Maximoffs, and their Aunt and Uncle ended up getting killed in the riots. However, not long after their escape from the village, Wanda and Pietro were found by Magneto, who recognized the Maximoff name and believed them to be his children.

The twins were then led to believe that they were mutants and drafted into Magneto's Brotherhood. For the next few years they fought as Quicksilver and Scarlet Witch against the X-Force. The two of them shared a special bond, and came to realize that the cause they were fighting for was not their own.

After a lengthy argument with their father, the two of them went on the run once more. They later got manipulated into working for the Hellfire Club, which got them on the Avengers's radar. Captain America and Hawkeye convinced them that they could serve a greater purpose in the world.

The two of them agreed to give being Avengers a try, and almost instantly fell in love with being heroes. Eventually, the Avengers would get into a conflict with the High Evolutionary, who revealed the truth of Quicksilver and Scarlet Witch's Inhuman heritage. From there, they began to reach out to the Inhuman Royal Family to try and become more connected to their true species.

Retrieved from "https://marvelcomicsfanon.fandom.com/wiki/Pietro_Maximoff_(Earth-101)?oldid=250309"
Community content is available under CC-BY-SA unless otherwise noted.