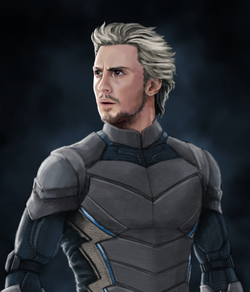 Not to be brash, my wife says I have a habit of not caring how other people feel, but I don't give a damn about the multiverse. I have people from my own world that need my protection.

Unlike most versions of Quicksilver, this Pietro was raised by Magneto from birth. When he and his sister, Wanda, were in their late teens, she was slaughtered by Sentinels, which radicalized Pietro against the humans. He would work alongside Magneto for the next few years in the war between humans and mutants, until he eventually discovered that Magneto had been collaborating behind his back with Charles Xavier to negotiate the Brotherhood's unconditional surrender. In a fit of rage, Quicksilver killed his father and Xavier, and established the mutant nation of Genosha, where he began housing mutants from across the world. After many of the X-Men fell to the growing threat of the Sentinels, many of them came to live on Genosha. Quicksilver then formed his elite team of mutants, consisting of his sister, Polaris, his wife Dazzler, Wolverine, Mystique, Rogue, Pyro, Magik, Colossus, Emma Frost, Forge, Havok, and Mastermind. For years, the war between mutants and Sentinels, who had overthrown humanity, waged on as Quicksilver and the Brotherhood continued to expand Genosha's borders. He even came to allow the surviving humans within his nation to protect them from the Sentinels.

Quicksilver would eventually be recruited into the Renegades by The Outsider, under the promise that if he returned to his home reality, the Sentinels would go on to murder his entire team, including his wife and daughter, and destroy Genosha. Unwilling to let this fate befall his family and his kingdom, Quicksilver agrees to join the Renegades and goes on several bloody missions with the team.

After serving with the Renegades for what seemed like years, Quicksilver eventually met an alternate version of Doctor Strange, who told him that the potential crisis in his world had passed, and he could return at any given moment, but that the Outsider kept him on the Renegades because of his power and usefulness. Enraged, Quicksilver struck a deal with Doctor Strange to assassinate his arch-enemy, Tony Stark, in order to be returned to his home world. After reuniting with his wife and daughter, Amelia, Quicksilver had grown tired of the needless bloodshed he'd experienced in the Multiverse, and began working with his greatest scientists to find a way to defeat the Sentinels once and for all.

Retrieved from "https://marvelcomicsfanon.fandom.com/wiki/Pietro_Lehnsherr_(Earth-3342)?oldid=244594"
Community content is available under CC-BY-SA unless otherwise noted.