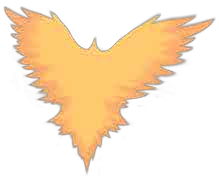 Variable (Immeasurable, unless it is within a host)
Weight

Variable (Immeasurable, unless it is within a host)
Eyes

First appearance
Survival of the Fittest

I am fire! And life incarnate! Now and forever -- I am PHOENIX!

The Phoenix Force is one of the oldest known cosmic entities, representing life that has not yet been born. The Phoenix Force is an immortal, indestructible, and mutable manifestation of the prime universal force of life. Born of the void between states of being, the Phoenix Force is a child of the universe. It is the nexus of all psionic energy which does, has, and ever will exist in all realities of the Omniverse, the Guardian of Creation, and a de-facto guardian of the M'Kraan Crystal. The Phoenix is among the most feared beings in the entire universe - having the power to cut and regrow any part of the universe, as well as destroy it entirely, which is part of the Phoenix's purpose: "The Judgement of the Phoenix": to burn away what doesn't work. Recent interventions of the Phoenix suggest that "what doesn't work" is what has become stagnant instead of naturally evolving.

A billion years ago, an alien race had weaved a spell that had halted evolution on their planet. The Phoenix intervened, bonding with one of the aliens of that world and breaking the spell, and purging the world. The Phoenix Host had five "Lights", disciples of sorts that helped the host control the infinite power of the Phoenix.

During its time as a sentient entity, it traveled the cosmos just like other cosmic beings. At first, the Phoenix Force was a formless mass of energy, but thousands of years ago, it came to Earth, and met a magician named Feron (who worshiped the legendary Phoenix), whose daydream-like visions prompted the Phoenix to adopt the firebird form it has today. Feron asked the Phoenix to help him by lending its energy to project a stone pillar (which resembled a lighthouse) across the multiverse.

Phoenix Force left Earth, but was called back when it felt the mind of a human transcend the physical realm, a mind that resonated with the Phoenix's energy: Jean Grey's.

The Phoenix Force is one of the most (if not the most) powerful beings in the Marvel Universe, possessing the unlimited power to create and destroy anything and everything. It has been stated to be an Extinction-Level Threat and an Omega-Level Threat.

Future Life-Force Tap: The Phoenix Force can tap into the energy provided by life-force reserved for future generations, thus denying them existence. The Phoenix Force possesses limitless cosmic energy. With or without a host, it is one of the most powerful entities in the Marvel Universe, capable of existing in any plane, time-line or dimensional existence.

Its immeasurable cosmic powers and abilities appear to be at their strongest and most powerful when bonded to Jean Grey ("the One-True Phoenix" who is completely compatible with the entity, possessing incredibly strong and powerful levels of telepathic, empathic, and telekinetic godhood status abilities, complete control and manipulation over the realms of matter, energy, space, time, existence and thought), as the two have a strange, profound connection to each other (Jean is the closest thing the Force has to physical form). It has yet to explain how Jean is "the true phoenix" and why.

Because Phoenix was linked to Jean's psyche, she maintained a psychic link with Cyclops.

As Jean Grey-Summers, the Phoenix possessed the normal human strength of a woman of her age, height, and build who engaged in moderate regular exercise. Using her cosmic powers and telekinesis, Phoenix could lift an unknown amount of weight, possibly in the range of millions of megatons.

Despite these weaknesses the Phoenix Force itself has never really felt it or ever even said it hurts. It only affects it host and even if the Phoenix is in control only the host feels pain, but its weakness is its control over its host.

Retrieved from "https://marvelcomicsfanon.fandom.com/wiki/Phoenix_Force_(Earth-1010)?oldid=255285"
Community content is available under CC-BY-SA unless otherwise noted.