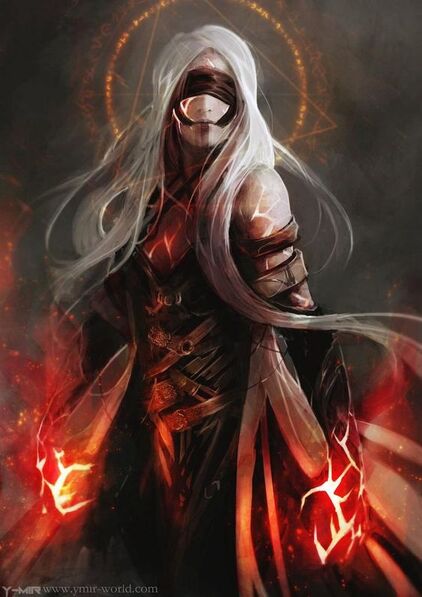 As night fell and the storm raged, Lady Ninro was still being treated as she was giving birth to Phirlou. When she was born, her eyes were both different colors, a dark garnet red and a light bravo blue. As she became a toddler, she showed some mystic power, as she could cause something to randomly levitate a few centimeters above the ground as she goes by the items, but it wasn't too special.

As she became older, more of her mystic capabilities developed and she became more potent. With her mystic abilities as an adolescent being mystic blasts, levitation and teleportation. Like before, it wasn't too special, as those were common powers for a Ninsae child of her age. But soon, her true mystic powers developed. With them, she was shown to be able to random slow people down by just walking and could either fast forward them or slow them down, without even knowing it. But with this power, she unintentionally turned multiple people into either infants or old people close to death. She then soon became aware of the power of this new-found ability and decided to not leave the castle so she could keep others safe.

As she became a teenager, she continued to practice her mystic abilities so she could control them. As she matured, she gained the control she sought over her power, with her spells becoming more potent. Phirlou then went outside more as she could control her power. As her true power emerged, deadly storms became more common. With it, most of the land of Eswea was destroyed usually, but she could use her abilities to reform it, but it would take more energy each time, so she let time do its own thing.

As time passed, she decided to train more and more. With this power, she could cast very powerful spells that made her special. She knew spells that others didn't and she even spent a day decoding a spell book that required years of decryption of languages and learned each of its spells.

She used more of her energy and she could reform the land without losing a lot of energy like last time. She also developed a spiritual sight, as she could see things others couldn't, so to make sure this was at its peak, she has always worn a blindfold. She slowly began to communicate with the spirits of past royalty to make sure her reign was the most prosperous.

When her mother died, she inherited the throne by right. As the queen, she was at the peak of her power and made sure her kingdom was well protected and prosperous. As her knowledge grew, she became a better queen.

She soon made the Six Laws of Mysticism of her kingdom. As they are moral qualities, the kingdom follows these rules. The rules included banning certain forms of magic, trainings of magic, creating magic/spells and other rules.

When she realized her ancestors were helping out the Black Order, she made the New Coven, to help out those who were heroic and brave. As a powerful High Priestess of Vonga, and the Ninsae Goddess of Magic, she could already tap into the power the immense power of Vonga, accessing her power to become her Avatar.

High Priestess of Vonga: With her power, she was able to become a high priestess of the magic goddess Vonga. With this power, she can manipulate the wings of Vonga's Phoenix. With that manipulation, she can control space, energy, plasma and reality.

Spiritual Sight: She can see and communicate with spirits as long as she can't see, which is why she is often wearing the blindfold.

Even though she is powerful, she can still be weakened by anti-magic and science-based powers. Despite that, she could be weak, but still could protect herself. She is also very weak against lava, which is why she doesn't commonly manipulate magma or lava.

Equipment: None known.
Transportation: She uses her portals, teleportation and flight.
Weapons: None known.

Retrieved from "https://marvelcomicsfanon.fandom.com/wiki/Phirlou_(Earth-616)?oldid=256351"
Community content is available under CC-BY-SA unless otherwise noted.