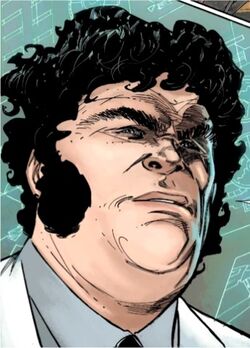 You see? It won't be any problem... You know what I can do, and what I can always do to everyone's problems, fellas... I tinker them...

Phineas T. Mason was a brilliant scientist and engineer skilled in invention. When he was already an adult, he had a repair shop named Phineas' Fix-It, along with his fiancée, Deborah, supporting him in his simple but fulfilling career. However, through unknown means that was yet to be fully revealed, Phineas and Deborah's relationship got into a massive complexity, and one of those reasons was due both Mason and Deborah's conflicting careers. Sadly, after getting into a massive fight, Deborah eventually called their engagement off without even directly telling him, leaving him in his repair shop, which was now his only home, alone and depressed.

One evening while deciding top finally close his business, Mason came across a group of mysterious robbers who were on the run, as they try to escape the authorities in an escape van. The van was able to outrun the police, followed by the NYPD cars who continued to follow their track. However, before the robbers were able to ride on and drive the van, Mason noticed that one of the robbers accidentally dropped one of their bags near a large garbage bin.

Curious to know what, he opens the bag, he was able to find all different sorts of advanced and classified tech that would be usually rare to be found anywhere else, and most interestingly enough, he also finds a few several types of the legendary Iron Man's arc reactor. Later inside his closed repair shop, Mason was continuously experimenting with the arc reactor, managing to activate the core and power a turbine. When he found that there was still had a large amount of rare tech inside the bag, Mason decided to keep it, convincing the group to turn to a life of crime by reverse-engineering and weaponizing the technology for sale.

With the sudden emergence of superheroes and other superhuman individuals all around New York for the next few months, Mason began to loathe these beings he considered used their abilities recklessly, having no responsibility in using them at all. He eventually became obsessed with superhumans so much that he unironically decided to become a powerful villain himself, taking up the alias of the "Terrible Tinkerer" and usually targeting one of his most encountered foes, who was the neighborhood web-slinger, Spider-Man in order to get rid of him, whenever they frequently cross paths.

Arms Trafficking for a Living

Later on, Mason started pursuing his career passionately as brilliant inventor who frequently makes several deals with powerful criminals, villains, and even a few notable terrorist organizations, designing their weaponry and gadgets in exchange for a load amount of cash, though he has been known to undertake criminal enterprises of his own, in his spare time. From his workshop, he would repair people's radios and place cameras and other spying equipment inside them in order to steal government secrets.

In his now infamous, simplified epithet as the Tinkerer, he secretly runs an underground military-style engineering bay disguised as a simple radio repair shop. Several times, customers have confronted Mason by entering his shop and presenting a radio to assist in his guise, often letting out witty quips, and a few more phrases as an excuse to keep his exclusive business with criminals remained hidden as possible. The original scheme of the Tinkerer involved the employment of several thugs and placing bugs in repaired radios to gain secret information on people and blackmailing them.

At some point, Herman Schultz, the Shocker, and several other known individuals such as Montana and a few more had an agreement to join forces with the Scorpion and Mason, in an attempt to steal technological supplies in a seemingly abandoned but protected Stark Industries facility in Manhattan. They were almost successful in delivering the stolen supplies in a cargo ship traveling to Staten Island, until Spider-Man arrives at the spot and intervened their heist.

Spider-Man was almost defeated by efforts of their joint forces, but in the end the Web-Slinger still became triumphant and manages to finally take them all down after briefly using the stolen supplies against the super-villains, defeating Schultz and the rest. Schultz and his other subordinates were left in the ship to be arrested by the police, but manages to escape the scene even before they could've arrive, when he used the remaining smoke grenade to vanish from their sight. The police arrested the others, while Herman continued to live his life as a wanted fugitive and criminal. Part of this news report was revealed to be false, since Mason was not in most of the news. In fact, he was able to escape the scene twenty minutes earlier than Schultz did escape his battle against the friendly web-slinger.

At some point later in time, Norman Osborn freed his old teammates in Manhattan Correctional Facility in order to reform the Sinister Seven once again. He and the escaped super-powered criminals finally re-approached the Tinkerer on his secret hideout (his old, abandoned small fix-it shop), in providing them equipment, where each and every one from the Seven manages to get their old suit, arsenal, and equipment back, thanks to Mason's technological knowledge and ability to tinker, and with it they were all upgraded. After the arms deal with the Tinkerer, the Seven kindly invited Mason to join the league, along with the Movement Alliance, though Mason nicely rejected the "peaceful" offer in response, implying that he finds it too uninteresting, beleiving that it would be better if they would leave him alone to work on his own, personal agendas.

Upon teaming up as the Sinister Seven once again, the members questioned Osborn his true intentions and purpose on reforming the villainous alliance. Osborn smirked in response, then told his "disciples" that the entire reason of bringing back the team together was not necessarily because of the web-slinger, but because they were recruited into a much larger alliance known as the Movement, an alliance formed by several criminal & terrorist organizations, notably led by the Red Skull's organization Hydra and Mister Sinister's Brotherhood of Mutant Supremacy.

Finding Mason's answer to be a little rude, Osborn and the Six eventually left Mason alone. However, although Mason's might made some sense, seeing him more as a lone, liberal worker, his true reason for rejecting the Seven's offer would then be revealed later on. Not shortly after the war has ended, when each and every member of the Sinister Seven (including Osborn) has finally been defeated at the hands of Spider-Man, the Defenders, and the agents of S.H.I.E.L.D., recent Director Phillip Coulson of S.H.I.E.L.D. made a great, secret deal with Mason earlier, though their deal had remained unrevealed, whatever it was made Mason help S.H.I.E.L.D. in tracking down by secretly putting a tracking device in most of their suit, arsenal, and equipment, the same ones he provided to the Sinister Seven during the days of Ultimate War.

Proceeding a year and four months after Ultimate War, Mason was shown to be a different man compared to what he was before. Currently, he was revealed to have been put under the custody of the authorities, having Mason be put under house arrest in his small repair shop for the next few years of his lifetime, wearing an ankle monitor, all for the sake his horrendous and unethical actions, most recently during the destructive, historic events of the Ultimate War. A year ago during their, this was done as the only known "work of mercy nonetheless," according to Director Coulson, with the authorities believing that having Mason under house arrest is the easiest but most punishable penalty that they could ever come up with, along with all his gadgets, designs, and inventions to be inspected by S.H.I.E.L.D., as long as his true identity remains unexposed to the public.

Super-Genius Intelligence: The Tinkerer has extensive knowledge in a wide variety of scientific disciplines and has a brilliant and innovative mechanically-oriented mind, producing multiple diverse inventions: His battlesuit designs include the Killer Shrike, Vulture and Slayer armors. He has a high degree of expertise in design and manufacture of inventive weapons and is a genius with seemingly limitless capacity to invent, construct, repair, modify or upgrade mechanical devices derived from preexisting technologies.

Retrieved from "https://marvelcomicsfanon.fandom.com/wiki/Phineas_Mason_(Earth-61615)?oldid=232410"
Community content is available under CC-BY-SA unless otherwise noted.