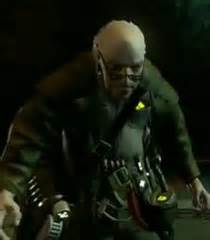 Little is known about the Tinkerer's life before the Secret War. It can be assumed to be similar to his mainstream counterpart.

The Tinkerer has been supplying Lucia von Bardas and other supervillains with technology. When encountered by the heroes, Tinkerer unleashes some robotic soldiers on them. Two accounts of his participation exist.

In the first account, in the reactor room, Tinkerer attacks the heroes in his Tank-Bot. Tinkerer escapes when his Tank-Bot is destroyed. Tinkerer later pops up in Nick Fury's secret base stating that he might know who is the one responsible for pulling the strings on the Thunderbolts that Iron Man had under control of his control nanites.

After retrieving the nanites by infiltrating Ryker's Island while Captain America attacks and enters the Negative Zone, Tinkerer is nowhere to be found. While Fury and the heroes infiltrated Prison 42, Tinkerer had already left.

The heroes later encounter him in a Repeater Tower in Reykjavík, Iceland where he attacks the heroes alongside two Fold soldiers (which is when Tinkerer is invulnerable in his personal force-field until they are destroyed). He managed to escape to the top of the Repeater Tower to jam the Nanite Statis Signal. He is defeated by destroying supervillain-shaped Life-Model Decoys with powers matching their specific villain which causes his control panel to explode in his face.

Retrieved from "https://marvelcomicsfanon.fandom.com/wiki/Phineas_Mason_(Earth-6109.2)?oldid=128887"
Community content is available under CC-BY-SA unless otherwise noted.