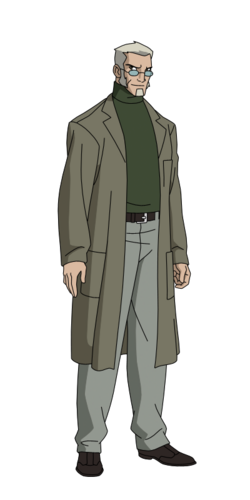 Stan Lee
First appearance
The Children's Crusade
(On a Screen)

Phineas Mason was a brilliant scientist and engineer, he is skilled in invention. His skill a prowess in these fields earned him the nickname the Tinkerer.

Tinkerer's first known job was when he hired Quentin Beck and other actors to masquerade as an alien invasion force. From his workshop he would repair people's radios and place cameras and other spying equipment inside them in order to steal government secrets. Peter Parker picked one up for his teacher and eventually discovered the device and returned dressed as Spider-Man. Discovering the "aliens" plan, he was eventually captured, but later freed himself, and in the ensuring struggle the base caught fire. While everyone fled, the Tinkerer dropped a fake mask of his face, which Spider-Man picked up and became convinced they were all real aliens.

He has also worked for the Beetle, Constrictor, Hammerhead and Owl.

Scientific Genius: The Tinkerer possesses extensive knowledge in a wide variety of scientific disciplines, as well as a high degree of expertise in designing and manufacturing innovative weapons and devices, even by using parts from pre-existing devices as unsophisticated as a color television set or an automatic gun.

Retrieved from "https://marvelcomicsfanon.fandom.com/wiki/Phineas_Mason_(Earth-1010)?oldid=148505"
Community content is available under CC-BY-SA unless otherwise noted.