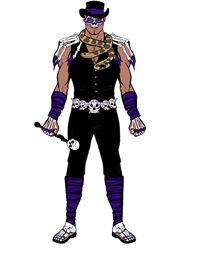 Eventually, during a battle with the Fantastic Four, Phillip died in combat. Phillip, through Hoodoo blood magic, possessed the body of his daughter, Alicia Masters. While in control of Alicia's body, Phillip/Alicia took on the alias of Puppet Mistress. Puppet Mistress acted as a villain to the Fantastic Four and took up the Puppet Masters' work right where he had left off.

Eventually, as Alicia's soul began to become too strong to suppress, Puppet Mistress created a clay duplicate body, imbued with Hoodoo blood magic, of Phillip's original. There was a strong possibility that Phillip's soul would not survive the transference; however, in his desperation, Phillip decided to go through with the transference ritual anyway. The ritual was successful and Phillip had a new body of his own once again.

Phillip has been engaged in an arcane cult gang war over New Orleans with Samuel Barone, the Black Talon, and his cult over the years. Phillip was initially a member of the Black Talon's cult; however, Phillip was rejected and kicked out due to his delusions of grandeur. Phillip formed his own Hoodoo Cult as a result.

Phillip is the Nexus version of Phillip Masters (Earth-616)

Retrieved from "https://marvelcomicsfanon.fandom.com/wiki/Phillip_Masters_(Earth-515)?oldid=231600"
Community content is available under CC-BY-SA unless otherwise noted.