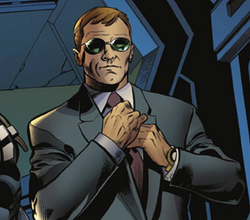 I just got back from a vacation in Tahiti. Boy, I gotta tell you, It's a magical place.

Phil Coulson was recruited into S.H.I.E.L.D. by Nick Fury straight out of High School. He thought Coulson had potential to one day take over as the Man on the Wall, and was the perfect candidate to be S.H.I.E.L.D.'S every man in undercover missions.

Coulson quickly grew to love working for S.H.I.E.L.D., as it made him feel closer to his idol, Captain America. Over the years, Coulson and Fury became close friends, and he became quite used to managing the special ops agents Hawkeye and Black Widow. Eventually, S.H.I.E.L.D. began to form the Avengers, and Phil finally met Captain America. Coulson thought the two would become close friends, but this never came to pass as he was stabbed and killed by Loki in the invasion.

However, Coulson woke up a few days later with little to no recollection of the incident, believing only to have been surgically repaired by S.H.I.E.L.D. scientists in Tahiti. He was then assigned to oversee the covert strike team, the Secret Warriors, in order to keep his mind off of things. However, over time, Coulson discovered that his time spent in Tahiti was not the first.

After uncovering Fury's secrets, Coulson learned that he had died in the line of duty 13 times, and each time was brought back to life through the use of the T.A.H.I.T.I. program, a top secret project within S.H.I.E.L.D. to be used in the event of an emergency that might result in the fall of S.H.I.E.L.D. Coulson was even more shaken when he discovered that he was to manage the project, only to have his memory erased after his first resurrection.

Coulson began having a crisis, believing he should either be dead, or is stuck in his own personal form of purgatory. However, he was able to seek counsel in the love of his life, Melinda May, and the Secret Warrior Quake, who he had come to see as a daughter. They helped him come to terms with his reality, and he told Fury that if he ever dies in battle again, he does not want to be resurrected.

[[Category: In a Relationship with Melinda May Characters]]

Retrieved from "https://marvelcomicsfanon.fandom.com/wiki/Phillip_Coulson_(Earth-101)?oldid=250550"
Community content is available under CC-BY-SA unless otherwise noted.