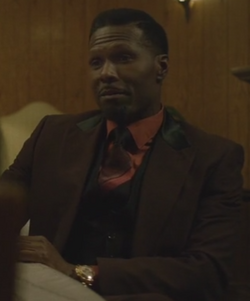 "Pistol Pete," along with his brother Buggy Stokes and sister-in-law Mama Mabel, built a criminal empire in Harlem through gun running, prostitution, and other activities — but refused to get involved with drugs.

Buggy died, leaving Mabel in control of the Stokes family business, with Pete as her right hand and main enforcer. Pete, recognizing his grand-nephew Cornell's musical talent and his potential to be something other than a criminal, encouraged his interest in the arts and even took him to auditions, in direct opposition to Mabel's wishes.

However, Pete also sexually abused his grand-niece Mariah Dillard, causing Mabel to send her away to college in hopes of stopping the abuse. When Pop tried to convince Cornell to join him and Donnie in the street, Pete insisted that Cornell continue practicing his music. However at the same moment, Mabel accused Donnie of selling drugs against her wishes, and ordered Pete and Cornell to kill him. Despite Pete insisting that Cornell was not ready, Mabel ordered him to do it and they both beat Donnie to death outside the house.

Pete chafed at being under Mabel's thumb, and so conspired with Salvador Colon to involve the Stokes Family in drugs without Mabel's knowledge. When Mabel found out about the conspiracy, she ordered Cornell to kill his uncle. Pete's death would haunt Cornell for the rest of his life — he continued to play the keyboard in quiet moments and defended him against Dillard's hatred, even suggesting she welcomed his abuse.

Retrieved from "https://marvelcomicsfanon.fandom.com/wiki/Peter_Stokes_(Earth-1010)?oldid=192449"
Community content is available under CC-BY-SA unless otherwise noted.