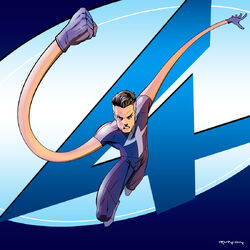 Super-Nerd (only by Flare)
Identity

Peter Richards, like his brother and sister before him, was a tricky birth. His parents were there to see it through, though. He was born fine, in the end. But it was always clear that Peter Richards would always be a little bit ahead of the rest. Even if it seemed that Peter might always be physically, but not mentally, powerless.

As a child, Peter was schooled publicly for a time, but he got too much attention from bullies and those who were jealous, especially when he skipped grades. So Peter opted to be homeschooled by his parents instead. He was able to reach the 10th grade when he was 12 years old. And when his powers developed, Peter was even happier. He was able to develop his powers in many ways, and he loved taking science with him. Peter had a perfect life inside of the Baxter Building's walls.

When his father was bested in combat, and he took out his mother with a weapon of his design, Fantastic Man took the place of his father on the team. Leading the likes of his godfather and uncle in battle made Peter very proud. He hoped to one day be able to lead the children of everyone on the team. And soon he got his wish, with Human Torch's son and Thing's daughter joining the team shortly after, as well as his older sister. But when Luna joined the team, they were thrown into chaos. She claimed she was only staying for a short time, she needed to be on the team for that short time, and she would not wear a F4 uniform. So, the team kept their F4 uniforms, and referred to themselves as F4 and trainee. Soon, they would accept Luna as a mainstay, and adopt they name Fantastic 5 at Peter's request.

Superhuman Intelligence: Peter has superhuman intelligence, from learning a lot as a child while actual intellect powers lay dormant.

Elasticity: Fantastic Man can shift his body into an elastic form that is bulletproof and knife-proof.

Elongation: Fantastic Man has the power to extend his limbs, allowing him to tie objects down with his body parts or get to destinations quicker by walking with longer legs.

Shape-Shifting: Fantastic Man's elastic powers allow him to achieve many different states, including:

Invisibility: Able to bend light around himself, making him appear invisible. He can sense all invisible objects, and he can bend light to turn others invisible.

Retrieved from "https://marvelcomicsfanon.fandom.com/wiki/Peter_Richards_(Earth-1175)?oldid=59194"
Community content is available under CC-BY-SA unless otherwise noted.