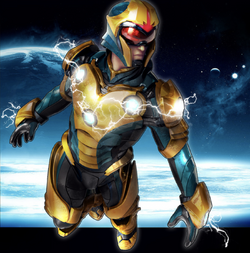 I deserve to be in the Squadron, god dammit!

Peter Quill was raised by his very religious mother in Missouri. However, he was never particularly enamored with religion. Rather, he had his sights set on the stars. After graduating High School, Peter began working for NASA to train to be an astronaut. However, he dropped out to take care of his mother when she developed a brain tumor, and subsequently became an alcoholic.

He would later be approached by Potts International after his mother's death, with an offer to put his dream into action. Peter accepted, and was put through Terrigenesis, emerging with incredible energy abilities, and even the ability to fly out into space.

Peter was branded as Nova, and quickly became one of the most popular Potts heroes who wasn't in the Squadron Supreme. He is believed to be an alien police officer by the general public, come to Earth to work alongside its heroes, which results in Potts making him take several forced vacations to keep up the image that he is in space.

Peter eventually became fed up with his treatment by Potts, constantly being overlooked for the Squadron, at first in favor of Spider-Monkey and Blur, but now in the fashionista Gigantica. Peter couldn't take it, and began selling secrets to the Avengers before publicly kidnapping Juniper Potts. The Squadron was then deployed to take him out, and his battle with them led to him and Captain Marvel traveling into the upper atmosphere to truly unleash their power on each other. However, Captain Marvel eventually gained the upper hand and overloaded Peter with energy, causing him to explode.

Retrieved from "https://marvelcomicsfanon.fandom.com/wiki/Peter_Quill_(Earth-1515)?oldid=244593"
Community content is available under CC-BY-SA unless otherwise noted.