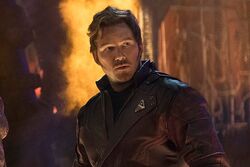 Earth-14235
Base Of Operations
The Milano
Characteristics
Gender

I learned the hard way that no matter how trustworthy someone seems, they're the most likely to stab you in the back the first chance they get.

Peter Quill grew up in Missouri and eventually joined NASA to train to become an astronaut. However, mere days after he was cleared for a mission to space, the Shi'ar arrived to claim the Earth in their war against the Chitauri. Resistance from Earth's heroes like the Avengers and the Fantastic Four resulted in the Earth's destruction. Quill's Celestial DNA allowed him to survive, and he adapted to life in space, becoming a pirate and dubbing himself the Ravager.

When the Outsider pitted the Renegades and the Outsiders against each other, Ravager managed to survive the battle and did not kill anyone on the other side. He then became a member of the Outsider and went out of his way not to form any relationships with his new teammates, but not to antagonize them either. He didn't want to end up like Deadpool. However, he was eventually granted the opportunity to return to his home world after the other Outsiders picked up on the fact that he had no desire to defend the Multiverse. Bidding them farewell, Quill returned to his home as a swashbuckler of the cosmos.

Retrieved from "https://marvelcomicsfanon.fandom.com/wiki/Peter_Quill_(Earth-14235)?oldid=244592"
Community content is available under CC-BY-SA unless otherwise noted.