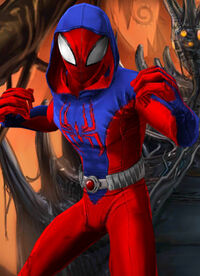 You're lost. Need help there, son?

-- Ben Parker with May Reilly.

The same as those of Kaine of Earth-616.

The same as those of Kaine of Earth-616.

His Clone creator is unknown for now because I can't decide which characterI chose between Miles Warren and Otto.

Retrieved from "https://marvelcomicsfanon.fandom.com/wiki/Peter_Parker_(Robert_Parker)_(Earth-54321)?oldid=253414"
Community content is available under CC-BY-SA unless otherwise noted.