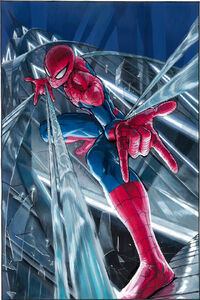 Peter recently stopped a D-list villain who attempted to plant bombs all over the city. Peter was only able to stop 3 of them the final one was located at his school library where Annette Pape, a girl who has feelings for Peter and accidentally saw hi without his mask but nonetheless she wants to be with Peter. The bomb blew half the library luckily, Spidey saved Annette and evacuated the other few students away from the building.

Tenure with the New Warriors

After befriending Nova and Firestar they asked if Spidey was interesting in joining their team. Spidey agreed but only temporary.

Retrieved from "https://marvelcomicsfanon.fandom.com/wiki/Peter_Parker_(Great_Earth)?oldid=208516"
Community content is available under CC-BY-SA unless otherwise noted.