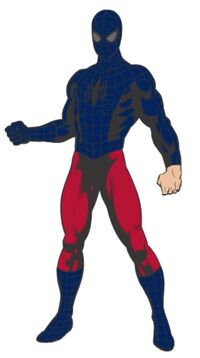 After his parents mysteriously disappeared, Peter was sent to his aunt's and uncle's house at age 6. Two weeks before his sixteenth birthday, he was bitten by a genetically modified huntsman spider that gave Peter the abilities of a spider as well. He started using his spider powers to try to look for his mother and father. On his sixteenth birthday, he successfully found his parents, but they were shot and killed almost immediately. Angered, he went out to kill the man who had killed his parents. He had not returned home by the next day, which made his uncle Ben go out to look for him. However, during this, Ben was shot and killed by the same person. Although angered even more, Peter soon learned that he should only use his powers for good, and he became Spider-Man.

High Intelligence: Peter's intelligence level is significantly higher than most of the people in his grade, and was twice offered to skip a grade, although he declined the chance both times.

Equipment: Web Shooters: Peter has two identical web shooters on both of his arms which allow him to tie up villains, and he can also swing from place to place using them.
Transportation: Spiderboard: Peter has a modified skateboard that shoots webs in the front and back, riding on the web that it creates.
Weapons:

Retrieved from "https://marvelcomicsfanon.fandom.com/wiki/Peter_Parker_(Earth-9420)?oldid=76463"
Community content is available under CC-BY-SA unless otherwise noted.