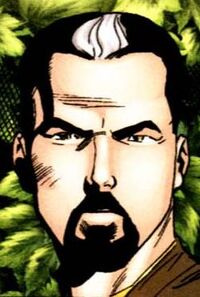 Hazel
Unusual Features
As a result of his final confrontation with Norman Osborn, Peter lost his right leg to the villain, forcing him to wear a prosthetic.
Status
Citizenship

I can't allow another one of my children to fall victim to this curse! Look at me, I lost a leg doing this!

-- Peter Parker to his daughter and nephew.

Not much is known about Peter's past history, but it can be assumed that it followed much of the same path of his Earth-616 counterpart.

When Timothy Parker Sr. was forced to drop his son, Tim Jr., off in Forest Hills, Peter reluctantly took on the responsibility of being Tim's guardian for the week while his real father was away. However, when Tim Sr. and his wife, Diana, were reportedly killed in a plane crash near Japan, Peter took on the role of Tim's surrogate father and raised him like his own son.

Final Battle Against the Green Goblin

Spider-Man pursued Norman Osborn during the Gathering of Five sooner than his Earth-616 counterpart, but not as fast as his Earth-982 counterpart. The outcome of the ensuing battle was the same as it was on Earth-982, but the results were even more catastrophic, as not only Norman Osborn was killed, but so was Mattie Franklin when she tried to escape with the artifacts that were to be used in the ceremony. Peter still ended up losing his right leg, just like how he did on Earth-982, forcing him to retire from being a costumed vigilante in order to support his family.

Between the years 1993 and 2004, Peter and Mary Jane Parker lived normal lives, with Peter becoming a forensic scientist working for the NYPD, all while raising their children, May and Ben, and their nephew, Tim. The five lived normal lives together, with May and Tim becoming geniuses in high school.

When Normie Osborn, the third iteration of the Green Goblin, attacked the Parker family on the Brooklyn Bridge, they were saved by a new Spider-Man, secretly Tim in a new costume, who then proceeded to beat the Goblin senseless. Peter then became suspicious and untrustworthy towards the new hero, whom he deemed an impostor and a copycat.

Eventually, Peter would have another encounter with Spider-Man after the hero was subdued by the villain Ice King.

During the years Peter had retired from being a warrior for justice, he had a close suspicion and fear that his children would inherit his powers. His suspicions were confirmed when May donned the mantle of Spider-Girl and continued to work alongside Spider-Man and even became a member of the New Avengers. Peter, not wishing to incite chaos, decided to not start an argument initially with his daughter over the use of her powers and allowed her to continue fighting. However, his restraint soon snapped when May accompanied her fellow Avengers to Sokovia in order to battle a new Ultron. Peter, terrified that his daughter would die fighting, confronted her when she and Tim (who still managed to keep his identity secret.) returned home after the battle, revealing his own identity in the process. Peter, while not grounding her, forbade her from being Spider-Girl until he thought about it more. Eventually, he relented and opted to train her how to use her powers. However, with her being a member of the Avengers, Peter often pressed his daughter with questions about Spider-Man, whom he began to call a menace, ironically.

The Death of Felicity Hardy

When Felicity Hardy, the new Scarlet Spider, was abducted and mudered by the villainous Goblin Master (who later died in a vengeful final battle with Spider-Man), Peter and his family were among the many who attended the funeral for the young girl. Felicity's mother, and Peter's ex-, Felicia Hardy, the former Black Cat, confronted Peter about her daughter's death, having seen Spider-Man place her body onto her bed the night she was murdered. This incident cemented Peter's growing dislike and even hatred for the new Spider-Man, who had already given up because of the death.

Return of the Sensational Spider-Man

Around 3 months after Felicity was killed, May was forced to contend with the terrorist fascist group Soldiers of the Serpent, eventually going toe-to-toe with their leader, the god-like Seth. With this broadcasting on the news, Peter initially tried getting back into costume to go help his daughter. However, Tim had already beaten him to the punch and was in costume before Peter could get to his. Confronting his nephew over keeping such a secret, Peter was blown off by Tim, who said that "there are bigger things happening here right now than you and I" before swinging off to help.

Loss of a Son

Revenge of the Goblins

Seemingly those of his Earth-982 counterpart

Seemingly those of his Earth-616 counterpart

Seemingly that of his Earth-982 counterpart

Seemingly those of his Earth-982 counterpart

Retrieved from "https://marvelcomicsfanon.fandom.com/wiki/Peter_Parker_(Earth-9022)?oldid=177646"
Community content is available under CC-BY-SA unless otherwise noted.