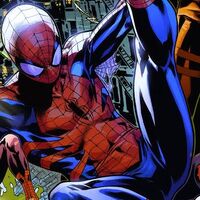 My Uncle Ben always said that "with great power there must also come great responsibility." I had the power to protect him... it was my responsibility!

Peter Parker was the son of Mary Parker and Richard Parker and the older brother of Teresa Parker. In third grade, Peter's parents were killed in a plane crash and he and his sister were adopted by their Uncle Ben and Aunt May.

While attending a school field trip exhibition demonstrating the safe handling of nuclear laboratory waste materials, the thirteen year old Peter Parker was bitten on the hand by a Radioactive Spider that had been irradiated by a particle accelerator used in the demonstration. He was horrified that he had developed the proportionate abilities of a spider, minus organic webbing, and kept his powers hidden. During the early days of the New York gang wars, Peter and his uncle were walking home from F.E.A.S.T. when they were confronted by Dennis Carradine. Carradine killed Ben and pointed his gun at Peter, but was too scared to pull the trigger and fled.

Outraged by his own cowardliness, Peter created the vigilante identity of the Masked Marvel. He used his powers to attack any criminals he found, hoping to find his uncle's killer. When his aggression seeped into Manhattan, the Masked Marvel was invited to join a group of vigilantes known as Slingers, but declined.

One day, Marvel was attacked by a man with electricity powers on Suicide Street. Electro easily overpowered Peter due his inexperience and almost subdued him, with only his superhuman strength and stamina keeping him going. When Electro was mocking a downed Marvel, he grabbed a discarded wrench and sucker punched Electro.

Parker eventually ran into Carradine, who revealed that he had killed him to be accepted into the Yancy Street Gang. After hearing this, Peter immediately when to the Slingers and told them that he was going about this wrong and asked if he could still join. Wraith tried to revoke her offer, but was stopped by Human Torch and Jackpot. He was given spider-themed equipment so he'd accept his powers and responsibility, taking on the identity of Spider-Man.

During an attempted defusing of a turf battle between Blue Krüe and the Chain Gang, one of the Chain's suffered a fatal heart attack. Wraith analyzed the corpse and found that he had died from drug overdose. Roberto "The Hellcharger" Reyes, leader of the Chain Gang, noted that green blood was the signature of the streetdrug "OZ." Following a hunch, Peter went to Oscorp Tower and found Oscorp CEO Norman Osborn working on OZ. He expressed joy in finally meeting the infamous Masked Marvel and happily told him his motives. Peter learned that Osborn lost his wife to gang-related violence and that selling OZ was the first step to control city crime. He asked Peter to join him, but he refused and promised to take down his criminal empire. Osborn scoffed and walked him out.

Spidey told his team what happened, but they were skeptical due to his lack of proof. Determined, he started publicly outing undercover member of the Goblin Nation. Osborn got paranoid and sent attack goblins after the Slingers. During one of their fights with the goblins, one goblin, Phil Urich, defected. Urich set up a meeting with his uncle, Ben Urich, the reporter. Wraith had created an antidote and began giving it to Oz junkies. They even convinced Reyes to advocate common folk taking a stand against Osborn.

With his power slowly crumbling, Osborn attacked New York with OZ powered soldiers hoping to stamp out those resisting his power. The Goblin, as he called himself, broadcasted a podcast demanding the city to surrender to him. Wraith figured out that he was broadcasting from Osborn Laboratories and the four heroes went after him. When they confronted him, Osborn injected himself with "OZ 2.0," which transformed him into a grotesque monster. Their battle spread out into the streets and The Goblin seemed to gain the upperhand; however, this was just a diversion so that Wraith could give him the anecdote and Jackpot and Spider-Man could take him out. Torch wanted to make a statement to the onlooking news helicopters, but was remained that the city was still in trouble and they left Osborn for the police.

The Good, the Bad and the Ugly

The Future is Now

Who is Agent Nine?

After being bitten by the radioactive spider, Peter gained the following abilities:

Retrieved from "https://marvelcomicsfanon.fandom.com/wiki/Peter_Parker_(Earth-774237)?oldid=255856"
Community content is available under CC-BY-SA unless otherwise noted.