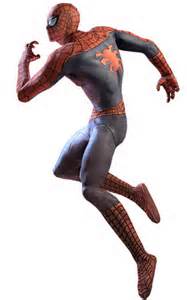 Brown
Unusual Features
Small hairs on his hands and feet that allow him to adhere to walls and most surfaces.
Status
Citizenship

At some point, after being bitten by a radioactive spider, Peter Parker rescued Dum Dum Dugan from Scorpion on the S.H.I.E.L.D. Helicarrier. The rest of his life prior to the game presumably followed a similar path to his mainstream counterpart.

Later, when the S.H.I.E.L.D. Helicarrier UNN Alpha was attacked by a group of super-villains, called the Masters of Evil led by Doctor Doom, Thor teleports Spider-Man, along with Captain America and Wolverine onto the ship's deck. The four fought through the Helicarrier to the Bridge, defeating Scorpion on the way. They then defeated Bullseye, Winter Soldier, Radioactive Man, and Fin Fang Foom to rescue the U.N.N. Alpha.

After the attack on Latveria, Spider-Man joins the heroes in stopping Lucia von Bardas' attack on New York. Shortly afterward, the Superhuman Registration Act comes into effect, forcing heroes to register with the government and initiating the Civil War. Spider-Man can choose to join Iron Man's pro-registration movement.

With the Fold defeated, the President of the United States declares the Civil War over and pardons every hero that joined Captain America's resistance movement. The Superhuman Registration Act was modified by the government, allowing heroes to voluntarily register with the government without revealing their secret identities or being forced into mandatory police service.

Months later, the Wrecking Crew attacked New York City's subway system. Their pursuers were Spider-Man, Iron Man, Captain America, and Thor. However, they surprisingly came across Skrulls. After the Wrecking Crew's defeat, the incapacitated Skrulls were sent to the Raft for interrogation.

After what transpired in NYC, a meeting had taken place in Washington D.C. This was over the superheroes' limitations under the Superhuman Registration Act. Spider-Man, Wolverine, Hulk, and Deadpool were sent in case of supervillain attacks. The shock of shocks: the meeting was attacked by a supervillain. The attacker was someone claiming to be Blizzard. However, he was then attacked by Taskmaster. One confusing battle later, "Blizzard" attempted to take the President via a teleporter implanted in his armor. However, he was shot down by Taskmaster.

Taskmaster explained that the Blizzard they fought was a Skrull. He parts off to find and kill more of them in the city. The squad of heroes was contacted by S.H.I.E.L.D., one of their platoons was being attacked. While making their way downtown, they are suddenly attacked by Mac Gargan, the new Venom. The villain wanted revenge on the U.S. government for inadvertently creating the Fold; claiming that formally infected supervillains have gone into seclusion, others even committing suicide. Venom was, of course, defeated.

Finally reaching downtown they find former Masters of Evil member Rhino fighting what appears to be Daredevil & She-Hulk. The heroes fought Rhino, but he manages to take down She-Hulk, revealing her to be a Skrull. The squad then fought "Daredevil" with Rhino and Taskmaster finding and helping the 5 take down "She-Hulk" again. The villains propose a temporary truce to defeat the Skrulls left on Earth.

On a search for the real Daredevil & She-Hulk: S.H.I.E.L.D. gets a lead from, surprisingly, Vulture. Taskmaster contacts the Sinister Six, and Doctor Octopus was willing to spare Sandman. The squad was also joined by Cable, Kraven the Hunter (hired by Taskmaster), and Penance. Once sneaking inside: Spider-Man, Captain America, Taskmaster, and the Rhino finds Skrulls with Vulture, Cable (recently), and Daredevil captured; and She-Hulk has been moved from the facility. After freeing the superhumans, a fight ensues across the facility, with the Vulture impostor taken down, but the Cable Skrull escape. However, a Ghost Skrull confronts the team. Upon his defeat, the Ghost Skrull reveals that the Skrulls have infiltrated every superhuman organization by this point.

After the Ultimate Alliance becomes a separate faction: Storm goes missing when investigating the redirection of S.H.I.E.L.D. transports, so a recovery team (Spider-Man included) was sent. Spidey, Sandman, Daredevil, and Wolverine infiltrate the facility to find the Living Laser. He says the Skrulls have set up base in the building, and have been taking mutants prisoner. The five superhumans fought Skrull versions of Quicksilver (who was crushed to death by falling debris from the fight) & Sunfire (who escaped), before confronting a Storm Skrull. After accidentally killing said Skrull by sending her into an electrical generator; the 5 free the real Storm, Quicksilver, and Sunfire before escaping the facility.

The UA attempts to contact the Fantastic Four to help them against the Skrulls & to create something to identify Skrull imposters from humans. However, after 2 failed attempts to radio the Baxter Building; a squad composed of Spidey, Toxin, recurring foe Electro, and Deadpool was sent once again for investigation. Getting inside, the team reaches the 35th floor; only to discover a captive Fantastic Four, their captors of course being the Skrulls. After besting them and a repurposed Dragon Man android, the team frees the Four and escape.

8 weeks later, the Alliance tracked down the Ani-Men to an abandoned area in Hell's Kitchen. A squad composed of Spider-Man, Cyclops, Iceman, and his longtime foe the Lizard; was sent to rendezvous with Luke Cage & Iron Fist. But upon arrival, they discovered that this was a supervillain hideout, and are subsequently ambushed by the Griffin. He was quickly defeated, but the team was confronted by the Shocker and Mister Fear, who was soon knocked out by Luke Cage & Iron Fist. The six storm the base, defeating along the way Tiger Shark, Armadillo, both Blackouts, Mentallo, the Purple Man, the Controller, the Wizard, and Madame Masque; until finally confronting the man coordinating the group, the Hood. It appeared that the Ani-Men, as well as the Wrecking Crew (who were imprisoned in the Vault before the breakout), have been convinced by the Hood into a supervillain crime syndicate. The Hood was defeated, but it's soon revealed that another member of the gang, the Slug, had already been replaced by a Skrull, having been trained with strong mental blocks to protect his mind from mental detection by the Hood. The Skrull tried to contact help but was discovered by the Hood and killed. In the confusion, Hood managed to teleport him and the gang out of the base.

Retrieved from "https://marvelcomicsfanon.fandom.com/wiki/Peter_Parker_(Earth-6109.2)?oldid=268422"
Community content is available under CC-BY-SA unless otherwise noted.