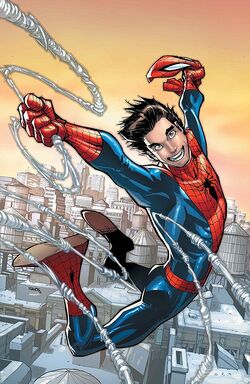 Dating
Origin
Origin
He was bitten by a radioactive spider, granting him superpowers
First appearance
Unknown

He was raised by his uncle. When he was fourteen years old, he was bitten by a radioactive spider. After three days, his Uncle Ben died, he said that great power comes with great responsibility, so Peter started saving the lives of millions of people. After seven years, a new threat known as the Sinister Six emerged, and he saved the world again without help from other heroes. He was invited to join the Avengers, but he refused.

Spider Physiology: Spider-Man possesses the proportionate powers of a spider, granted to him from an genetically-altered, radioactive spider which bit Peter Parker during his attendance of the exhibition. The radioactive, complex mutagenic enzymes in the spider's blood that were transferred at the time of the bite triggered numerous body-wide mutagenic changes within Parker, granting him superhuman strength, speed, toughened flesh, and numerous arachnid-like abilities. That mutation granted him an "enhanced chromosome pattern".

Retrieved from "https://marvelcomicsfanon.fandom.com/wiki/Peter_Parker_(Earth-609)?oldid=238650"
Community content is available under CC-BY-SA unless otherwise noted.